A Granada man is facing prison time after allegedly selling more than 7 grams of methamphetamine to an undercover deputy and informant in Albert Lea in April. 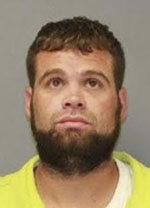 His first appearance on the charge was Tuesday.

Court documents state on April 15 a Freeborn County Sheriff’s Office deputy was told by a confidential informant that Casey would sell two eight-balls of meth weighing a total of 7 grams for $500.

That afternoon, the deputy and informant reportedly traveled to a residence on Third Street and met with Casey.

After reportedly getting a scale and measuring the methamphetamine, Casey reportedly bagged the meth and handed it to the deputy. The confidential informant then handed the money to Casey, court documents state.

The baggie reportedly weighed 7.6 grams and field-tested positive for meth.

Second-degree meth sale carries a maximum sentence of 40 years in prison and a $500,000 fine, with a sentence of no less than three years.