Mary (Gatling) Andrew, 73, passed away peacefully Monday, May 23, 2016, at The Dawn Hospice in New York City. She was born Nov. 6, 1941, in Waverly in Surry County, Virginia. She was one of the three children born to the late Fred and Annie Elizabeth (Britt) Gatling. 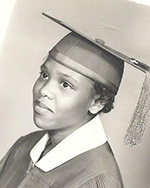 Mary was joined in holy matrimony to the late Martin Lethan Andrew, who preceded her in death in 2004.  She was a 1961 graduate of Robert L. Vann High School and relocated to Brooklyn, New York. She was employed at several apparel companies and retired as a home health aide with Self-help Community Services Inc. of New York.