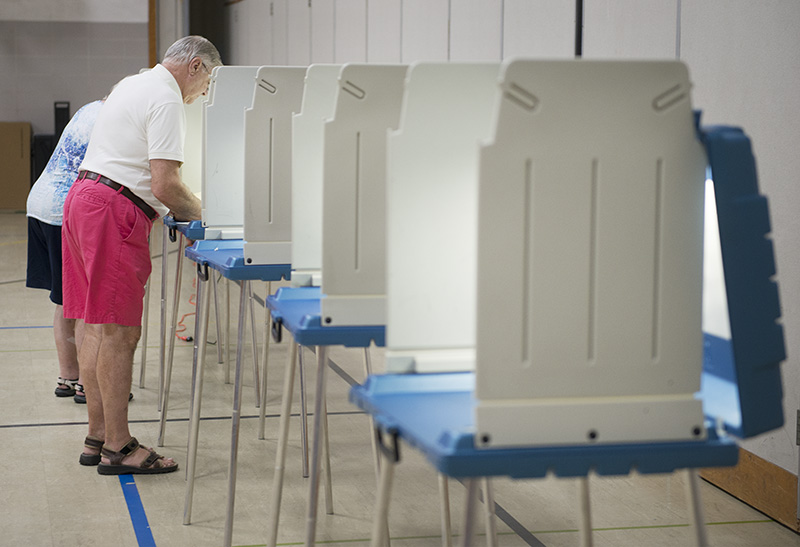 MINNEAPOLIS — The race was on Tuesday for a shot at a U.S. House seat being vacated by one of Minnesota’s most visible congressman, with four Republicans hoping to advance to November.

GOP Rep. John Kline’s retirement put in play a southern Minnesota seat seen as winnable by either party. While Democrats unified behind a single candidate, Republicans did not.

Turnout was light. In one of the district’s larger communities, the Minneapolis suburb of Lakeville, just 115 people had voted at an area polling place as of 5 p.m. — less than 5 percent of the precinct’s registered voters. Several voters said they fielded fewer door knocks or candidate mailings and felt less pressure to vote Tuesday than in past primaries.

Among those who did was Todd Laubach, who said he voted for Lewis because of Lewis’ radio career, fiscal conservatism and party endorsement. He said he wasn’t concerned about the criticism over some of Lewis’ on-air remarks.

“I know he can be inflammatory. He’s an entertainer,” Laubach said. “That doesn’t sway me that he can’t be reasonable.”

Matt Schiefelbein, 20, said he was the only one among his group of friends to vote. He said he voted for Miller, citing Kline’s endorsement of Miller, among other things. He also said he was disturbed by some of Lewis’s “stupid, kind of Donald Trump-like” comments.

Paul Burski said he voted for Lewis because he sees the radio host as similar to the Republican presidential nominee.

“I just think we need change,” Bruski said. “I’m tired of the way things are going.”

Andy Lokken, the elections manager for Dakota County, which includes Lakeville, said he was surprised that the congressional race didn’t drive more turnout. But he took comfort that the county’s new voting system worked well. He said it was the first major county-wide election he’s worked in which he didn’t have to replace equipment.

Meanwhile, one of Minnesota’s longest-serving lawmakers was fighting to extend her 44-year legislative career in a three-way Democratic primary. Rep. Phyllis Kahn, of Minneapolis, was vying with two Somali community activists, Ilhan Omar and Mohamud Noor, to keep her seat.

A win for either of Kahn’s challengers could pave the way for the nation’s first Somali-American lawmaker, since Tuesday’s winner will likely be heavily favored in November in the liberal district.

House Speaker Kurt Daudt also had a primary challenger. Daudt, seen as a potential Republican candidate for governor at some point, was trying to fend off Alan Duff, a former Isanti County commissioner who has argued that Daudt hasn’t done enough to limit state spending.

The only statewide race was for the Minnesota Supreme Court, where Associate Justice Natalie Hudson was the incumbent in a three-party field. Two candidates advance to November.

Turnout was expected to be very low. Ramsey County elections chief Joe Mansky, a former state elections official, estimated there would be a 5 percent turnout in his county, the state’s second-most populous. The secretary of state’s office wouldn’t give an estimate.