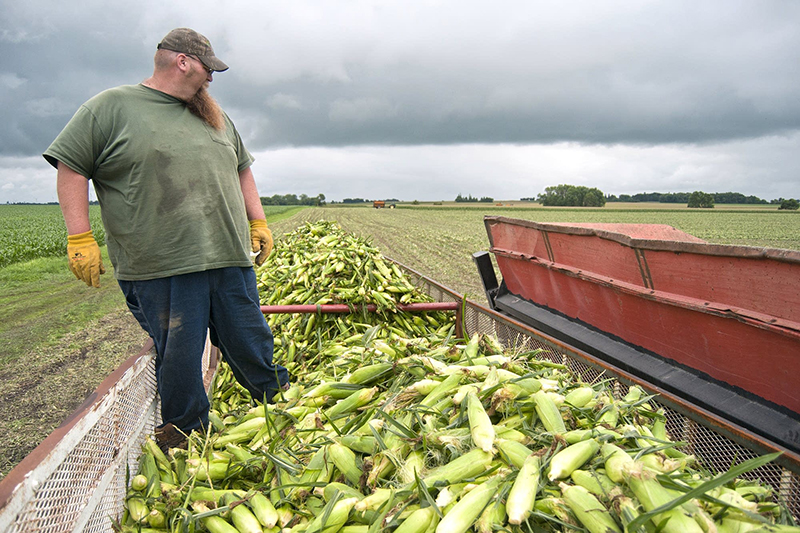 Shane Bauer, one of five drivers, looks over his trailer filled with sweet corn at a field south of Blooming Prairie. -Jackson Forderer/MPR News

Curtis Linge watched as a combine rolled through acres of sweet corn just north of Austin. It was the first day of harvest for his company, Lakeside Foods. Things were looking pretty good.

“It’s been a good season,” said Linge, 63, who has worked in the vegetable processing business for more than 40 years. “We have had some heat here, but the moisture’s been adequate. Looks to be a very good crop at this time.”

Corn on the cob is a staple of summer eating. But the sweet corn harvest is more than just selling freshly picked ears at a roadside stand. It’s a huge Minnesota industry.

Sweet corn is grown on about 100,000 acres of farmland across the state, making it the nation’s leader with a third of U.S. production. Most of the crop will either be frozen or canned for resale.

Lakeside’s production is part of a statewide sweet corn picking season that includes companies like Birds Eye, Seneca Foods and Del Monte as well as the famous Green Giant label.

The field by Linge was headed for Lakeside’s processing plant in Owatonna. There, the kernels will be packed into cans destined for mainly grocery stores and restaurants.

It was yielding about 7 tons of ear corn an acre, close to what was hoped for. If that’s the average yield this year in Minnesota, the state will produce the equivalent of about 700 million cans of corn.

For some companies, harvest season can be almost two months long. That’s because the canning plants dictate growing schedules. Since the plants have limited capacity, staggered schedules insure the daily harvest is only what the canning line can handle.

For instance, the stalks on Paul Platz’s farm about 10 miles north of New Ulm in southern Minnesota are only a little past knee high. The crop is fine. The short height is because it was only planted a month ago, said Platz, a contract grower for Seneca Foods.

Platz said he prefers to plant his sweet corn late in the season. It gives him more time to get his other work done. Besides conventional corn and soybeans, he also plants peas, a sign that grocery store vegetables can be a profitable pursuit for farmers.

Although his sweet corn is on the short side, Platz can already see the beginning growth of the cob inside the plant, and its potential.

“It’s really fragile right now,” he said as he cut open a stalk with a pocket knife, “but that’s your cob.”