Olive Ann (Rasmusson) Godtland was born June 20, 1930, in Emmons to a proud Norwegian family. She was the daughter of Otto and Alice (Butler) Rasmusson. She grew up in Emmons and was baptized and confirmed at Emmons Lutheran Church. She graduated from Albert Lea High School in 1948. She graduated in 1950 from Waldorf College with an associate’s in education degree. During college, she was a member of Waldorf Choir, touring throughout several states. She graduated in 1960 from Mankato State University with a Bachelor of Science degree in education. 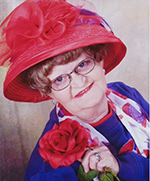 On Aug. 16, 1954, she was united in marriage to Arthur Godtland Jr. at Emmons Lutheran Church. She worked 38 years as a teacher, which included being a kindergarten teacher for 26 years in her hometown of Emmons. She retired at 58, relocated with her husband to northern Minnesota and lived in the lake home built by her husband, Art, on Lake Benedict near Walker. Art also built the home they lived at in Albert Lea with their four children. After retirement, she had teaching licenses in three states: Minnesota, Texas and Arizona. She was a member of Hope Lutheran Church in Walker. Enjoying her retirement, she was the queen of Leech Lake Ladies Red Hat Society, a member of the Sons of Norway, the American Legion Auxiliary, attended a monthly book club and liked doing stained glass. She had a strong Christian faith, and loved her family, friends and dogs.

Olive Ann passed away Monday, Aug. 15, 2016, at the age of 86. Her family said she will always be the queen of their hearts. God bless her memory.

The memorial service will be at 11 a.m. Thursday at Hope Lutheran Church, 305 10th St. S., in Walker, with visitation with the family one hour prior to the service.

Internment will be at 3 p.m. Thursday at the Minnesota Veterans Cemetery, 15550 Minnesota Highway 115, Little Falls.

Visiting with the family will be from 5 to 8 p.m. Friday at Bonnerup Funeral Home, 2210 E. Main St. in Albert Lea.

A celebration of life service will be at 11 a.m. Saturday at Emmons Lutheran Church, 490 Pearl St., Emmons, with visitation with the family one hour prior to the service.