A Mass of Christian burial for Orin K. Solland will be at 10:30 a.m. Saturday at St. Theodore Catholic Church. The Rev. Russell Scepaniak will officiate. Visitation will take place from 5 to 7 p.m. Friday, at Bonnerup Funeral chapel, and again one hour prior to the service at the church. A private family burial will take place at Fort Snelling. The Rev. Harry Winter will officiate. 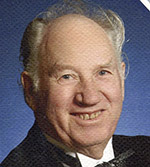 Orin Kay Solland was born July 18, 1933, to Jens and May (Haugerud) Solland in Freeborn County. After his schooling, he enlisted in the United States Army and was a member of the 82nd Airborne Division. He served honorably for two years. On Feb. 20, 1961, he was united in marriage to Margaret Billat. The couple raised four children: Lori, Mark, Angela and Melissa.  Orin was confirmed in the Catholic faith and was a member of St. James Catholic Church in Twin Lakes.

Orin worked very hard throughout his life. He worked for Wilson & Co. for 33 years, drove a semi, drove school bus for Emmons and farmed. Aside from work, Orin enjoyed having a game farm, where he raised animals including cougar, buffalo, deer and many others. He was an avid outdoorsman who enjoyed hunting, gardening and motorcycling. In his earlier years he piloted his own plane and enjoyed snowmobile racing.

He is preceded in death by his parents Jens and May Solland; father and mother in-law Joseph (Agnes) Billat; brothers Marvin and Donald Solland; and brothers in-law, Leon and Luvern Billat.

Orin was a man of high morals and integrity. He always stood up for what was right, even though sometimes that wasn’t always the easiest thing to do.