The Lord called home Paul Dahle, formerly of south Emmons and Lake Mills, on Wednesday, Aug. 3, 2016. Funeral services will be at 1:30 p.m. Saturday, Aug. 20, 2016, at Lime Creek Evangelical Lutheran Church, in rural Lake Mills. The Rev. Dan Basel will officiate. Burial will take place in Lime Creek Evangelical Lutheran Cemetery with military honors conducted by the American Legion Louis/Tveite Post No. 317 of Emmons. Visitation will be from 5 to 7 p.m. Friday at Mittelstadt Funeral Home, 902 E. Main St. in Lake Mills, and will continue one hour prior to the service at the church. 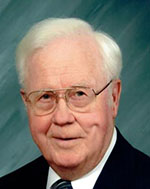 Paul Elmer Dahle was born July 27, 1929, in Albert Lea, to Elmer and Margaret (Tveite) Dahle. He grew up on the family farm south of Emmons and attended Lime Creek Lutheran School. He graduated from Emmons High School in 1946. Paul graduated from Mankato State Teachers College in industrial arts and went on to teach in a one-room school in North Dakota. He served in the National Guard. In December 1950, he enlisted as an airman in the United States Air Force. He was commissioned following officer candidate school at Lackland Air Base in Texas and began training in language and radar interception. As a second lieutenant, he met Sarah Margarette Singleton in Houston and began a whirlwind courtship. The couplemarried seven weeks later on Sept.5, 1953, in Margarette’s hometown of Senecaville, Ohio.

Paul went on to serve 20 years in the USAF, stationed in various locations, including Cape Cod, Iceland, Maine, Fargo, Ohio and the Philippines. While stationed in California, daughter, Laura, and son, Joseph, were added to the family. Paul’s military career included being a navigator on C-130, C-97 and F-89 aircraft, teaching at the University of Cincinnati, briefing the general at Wright Patterson Air Force Base, and a 13-month combat tour in Vietnam, for which he was awarded the Distinguished Flying Cross, the Air Medal with Four Oak Leaf Clusters, the Presidential Unit Citation and the Vietnam Campaign Medal. Additional distinctions included the Small Arms Expert Marksmanship Ribbon and the Meritorious Service Award. While in the military, Paul completed his master’s degree in counseling and education.

In December 1970, Paul retired from the Air Force as a major and taught the Junior Reserve Officer Training Corps at Midview High School in Grafton, Ohio. In 1975, his family moved to Lake Mills, where Paul served as high school guidance counselor for many years.

Paul enjoyed many activities including golf, bridge, poker, gardening, and spending time with his grandchildren. Throughout Paul’s life, he was active in his local church, serving in various capacities. Central to his life was his trust in Jesus as his Savior and Lord.

He was preceded in death by his parents Elmer and Margaret Dahle; and beloved wife, Margarette Dahle.