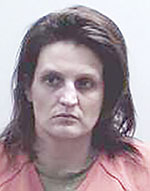 O’Connor is accused of forging a nearly $400 check intended to buy a vacuum for the Mower County jail, forging checks at Hy-Vee and Wal-Mart, and maxing out a credit card through more than $1,000 in several online purchases before she was eventually arrested after police tracked her whereabouts when she tried to use the maxed out credit card to order from Steve’s Pizza.

In one case, a woman spoke to law enforcement on Aug. 24 about her US Bank credit card being “maxed out” in a suspected scam.

After talking with Steve’s Pizza officials, officers learned the card had been declined and the woman calling had been advised to pay in cash. Police got a phone number used in the order and the pizzas had been delivered to an address on the 1600 block of East Oakland Avenue.

Police then traced the number to O’Connor, who had warrants for her arrest in other cases.

In an unmarked car, officers conducted surveillance near the East Oakland residence, where O’Connor and Michael Robert Williamson, 27, left in a 2000 Honda Accord.

O’Connor tried to hide her face when passing the unmarked car before the officer pulled the car over. O’Connor gave police the false name of a real person several times before she revealed her name after continued questioning by officers.

In the car and O’Connor’s purse, police found plastic bags used to possess drugs, a piece of paper with a debit card number and a person’s name, and a bag of 1.15 grams of methamphetamine.

O’Connor and Williamson denied possessing the meth, but Williamson told officers O’Connor was “scrambling” as they were being pulled over and handed him the meth.

Both O’Connor and Williamson were arrested. O’Connor was charged with two counts of felony financial transaction card fraud and felony fifth-degree drug possession.

In a second case, O’Connor is accused of taking and forging a check intended to pay for a $399.95 vacuum purchased for the Mower County jail.

According to a court complaint, the Mower County Sheriff’s Office and the county financial department realized the check mailed to Austin Vacuum Center had never been received, and the business inquired about payment.

The check was taken from the mail, according to authorities.

After an investigation, the sheriff’s department and financial worker learned the check had been cashed at Wal-Mart on July 11 after the payee name was altered to “M L O’CONNOR” and the check was endorsed by “Meranda O’Connor.”

At Wal-Mart, an asset protection worker told law enforcement that O’Connor would have needed to use photo ID to cash the check and that whoever cashed the check used the money to buy $13.54 in school supplies.

In a third case, a couple contacted police after US Bank’s Corporate Security informed them of a suspected fraud on an account after a series of online checks were ordered.

According to the court complaint, the Austin branch of US Bank had received a copy of a forged check used at Hy-Vee’s deli counter for $348.45 dated July 22. Another forged $76.22 check was used at Hy-Vee gas. Though the name on the check was written to a southwest Austin resident who is not involved in the case, the account information matched the victim.

A man said to be O’Connor’s boyfriend later returned $151.78 worth of merchandise.

While the victim was at US Bank, an electronic debit came in from an unknown person at Wal-Mart for a $120 payment to “Team Mobile Air Time.”

Through surveillance videos at Hy-Vee and Hy-Vee gas, officers recognized a woman with O’Connor during the Hy-Vee incidents. When questioned, she told police she and O’Connor were in the surveillance footage and admitted she knew O’Connor had a history of wiring bad checks.

O’Connor was charged with two felony counts of check forgery.