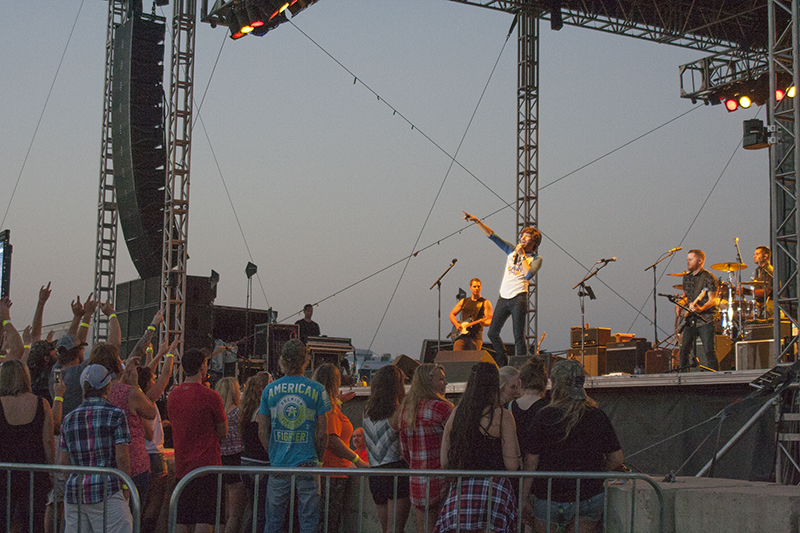 Each year, the Freeborn County Fair hosts five nights of music in the Grandstand for the enjoyment of fairgoers.

Mike Woitas, vice president of the fair board, has been in charge of bringing Grandstand entertainment to Albert Lea for more than 20 years.

Woitas works in sales at KATE Radio as well as serving on the fair board. During the fair, he noted it feels like working two jobs.

The Sunday prior to the fair, the stage gets built from the ground up, and during “The Six Best Days of Summer,” Woitas can be found organizing meals, stagehands and all things Grandstand-related for the entertainers. 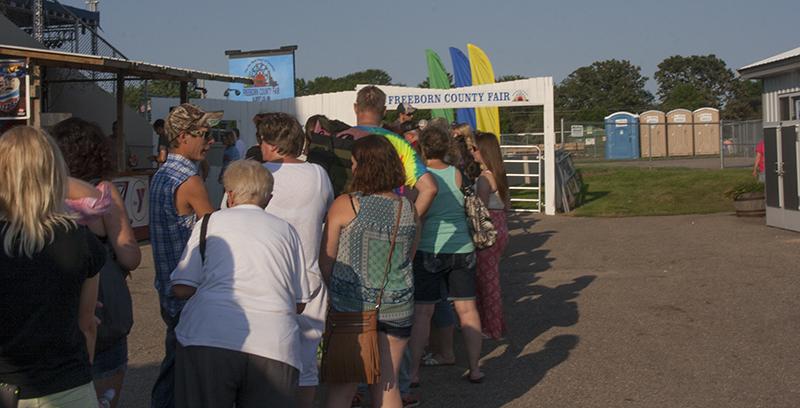 Country music fans line up hours prior to concerts at the Grandstand. – Emily Wangen/Albert Lea Tribune

Entertainment preparations for this year’s fair began at the end of fair week last year when Woitas started searching for acts to come to the fair.

Woitas said he thinks that Freeborn County Fair has a long-standing tradition of bringing acts that are on the rise to perform at the Grandstand.

To find those up-and-coming acts, he uses radio charts and the Billboard Country charts.

By November, he said he has typically found some act ideas.

From there, Woitas and the fair board meet and vote on his proposals. If the board approves the acts, contracts are traded with managers until an agreement is reached.

Some popular acts brought to the fair in past years include: Kellie Pickler in 2013, Josh Turner in 2015 and The Beach Boys in 2011.

Due to the high demand of concert seats over the past few years, the fair has started offering reserved seats through Midwestix.

The sales of reserved seats has helped offset the price of performances, alongside with an admission fee to the fair.

This year is going to have a record-setting crowd tonight, according to Woitas, when rock ‘n’ roll singer Ted Nugent takes the stage.

Nugent’s appearance has brought some controversy within the community, making it a tough year for the board, but Woitas and the fair board plan to stay positive and prepare for another night of music despite backlash from some members of the community.

People from all over the Midwest are expected to come to Albert Lea tonight to enjoy an evening of music, Woitas said.

It’s not just Nugent that will bring in a large crowd. According to Woitas, country music fans will begin to line up as early as 10 a.m. to get a good seat for the performances.

Woitas said his favorite part of the fair is seeing fairgoers enjoy all his hard work when Grandstand performers take the stage.

The fair board has a motto, according to Woitas, and that motto is “Educate and entertain people.”

That motto is kept in mind when any events are chosen to be a part of the fair, from the jugglers to Grandstand performers.