Funeral services for Ruby C. Fredrickson, 93, of Albert Lea will be at 1:30 p.m. Tuesday at First Lutheran Church in Albert Lea. The Rev. John Holt will officiate. Interment will be at Hillcrest Cemetery. Visitation will be from 4 to 6 p.m. today at Bayview/Freeborn Funeral Home and one hour prior to the service at the church. Online condolences are welcome at www.bayviewfuneral.com. 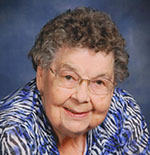 Ruby C. Fredrickson was born Jan. 4, 1923, in rural Manchester, the daughter of Oscar Alfred and Mina Amelia (Gunderson) Severson. She was baptized Jan. 21, 1923, at West Freeborn Lutheran Church and confirmed at First Lutheran Church on May 16, 1937. Ruby attended country school until her family moved off the farm in 1933. They lived in Waseca before moving to Albert Lea when she was in the fifth grade. She graduated from Albert Lea High School in 1940.

On May 24,1941, Ruby was united in marriage to Delmar Fredrickson at First Lutheran parsonage. They lived in rural Glenville and had a mink farm. In 1959, Ruby and Delmar moved back to Albert Lea. She did general office work at Farm Bureau Insurance and Federation.  While living near Glenville, she was a member of Round Prairie Lutheran Church, where she was active in women’s aid and circle and she taught Sunday school. Ruby was in 4-H Leadership and County Extension Club. More recently she was a member of First Lutheran Church, where she was a member of circle and a 40 year member of altar guild. Ruby was the past president of the Veterans of Foreign Wars Auxiliary No. 447, past president of VFW Auxiliary District 1 and past president of the American Legion Auxiliary No. 56. She traveled to and through all 50 states, went on a Scandinavian tour and a trip to Mexico.

Ruby’s family would like to thank all of the staff at St. John’s Lutheran Community and The Meadows for their dedicated service and time with Grandma Ruby.