A celebration of life will take place for Sandra Tonnette Oakland from 2 to 4 p.m. Saturday in Bethany Hall at First Lutheran Church in Albert Lea.

Sandra Tonnette Oakland of Monrovia, California, died May 2, 2016, from a brain aneurysm. 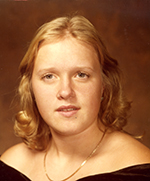 She was born Aug. 25, 1960, in Osage, Iowa. She attended schools in Carpenter, Iowa, and St. Ansgar, Iowa, and later moved to Sierra Madre, California, where she graduated from Sierra Madre High School in 1978.

She worked for Kaiser Permente in Monrovia.

She spent many hours volunteering for many different organizations. She was loved by all who came in contact with her.

The joys of her life were her children Michael and Melissa and grandson, Alex. Grandma and grandson were inseparable.

She was an avid Dodger, Twins and Vikings fan. Those who attend her celebration of life are encouraged to wear apparel they may have from those teams in honor of her.

She was preceded in death by her parents Walter and Helen; sister, Georgette Ann; brothers-in-law Harold Vandenhuevel, Carl Attig and Jerry Romero; and grandparents Frank and Alma Goodrich, Helen Goodrich, and Jacob and Inga Oakland.