Short film made by locals premieres in Albert Lea 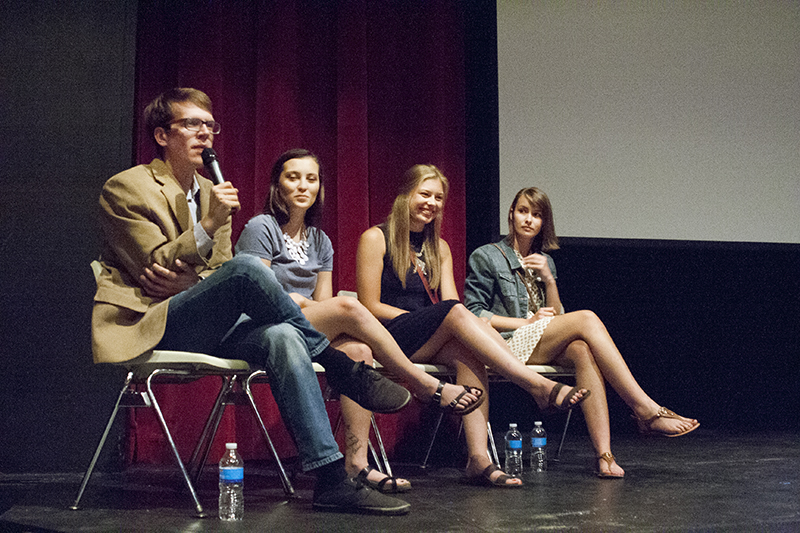 Director Ross Pirsig and the cast of “Guilt” answer questions from the audience after the premiere of the short film on Saturday at the Marion Ross Performing Arts Center. - Emily Wangen/Albert Lea Tribune

On Saturday, a short film full of local talent premiered in Albert Lea at the Marion Ross Performing Arts Center.

The film, “Guilt,” was a 20-minute story of a teen named Faith, played by Justine Nelson, who hits an animal while behind the wheel with her friend, Carly, played by Tianna Abrego.

The story continues when the pair learns one of their classmates’ pet dog was killed that night. The film explores the feelings of guilt Faith feels.

After the film there was a question and answer session with director Ross Pirsig and the stars of the film.

Pirsig said “Guilt” is his first film meant for an audience, as his previous work has been for friends or school projects.

The three actresses are from Albert Lea and have all participated in Albert Lea High School theater productions. They said they were approached by Pirsig last October about starring in a film he was directing. From there the cast had read-throughs at the high school and then memorized scenes piece by piece, according to Abrego.

The hardest part of filming, according to Abrego, was filming a scene in the cold weather while staying in character.

Abrego is a recent graduate of Albert Lea High School and will attend Bethel University, majoring in biology and minoring in theater.

The other two cast members, Keyeski and Nelson, will be seniors at Albert Lea High School this school year.