Swimmer looks to use talents at University of Minnesota 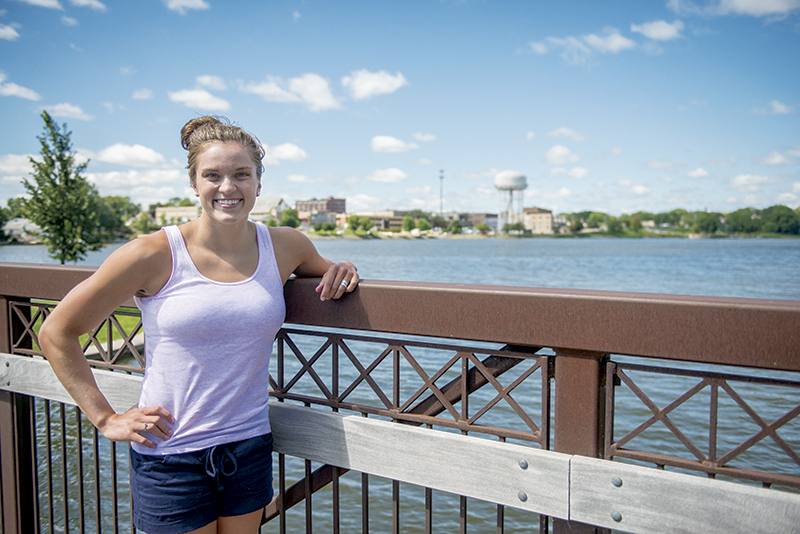 Albert Lean Lindsey Horejsi has finished a big year with graduating from Albert Lea High School and competing in the U.S. Olympic Trials in swimming. Her next step will be attending the University of Minnesota this fall. - Colleen Harrison/Albert Lea Tribune 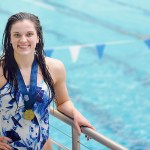 Lindsey Horejsi stands in front of the Albert Lea High School pool in January 2015 after a training session with the Albert Lea boys’ swimming team, while she wears a medal for taking first place in the 100-yard breaststroke at the USA Junior National Championships in December 2014. – Micah Bader/Albert Lea Tribune 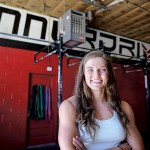 Lindsey Horesji poses for a portrait in June in the CrossFit gym she has trained at for years in Austin. – Eric Johnson/Albert Lea Tribune 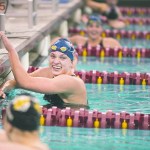 Lindsey Horejsi pauses to celebrate after breaking the national high school record in the 100-yard breaststroke with a time of 58.56 seconds in November 2015 during the girls’ Class A state swimming prelims at the University of Minnesota Aquatic Center. – Colleen Harrison/Albert Lea Tribune 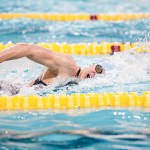 Lindsey Horejsi swims a leg of the 400-yard freestyle relay in November 2015 during the girls’ Class A state swimming meet in Minneapolis. The Tigers finished third with a time of 3:36.48. – Micah Bader/Albert Lea Tribune 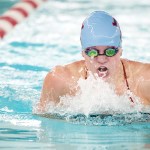 Lindsey Horejsi swims the 100-yard breaststroke in November 2015 during the Section 1A meet at Ellis Middle School in Austin. – Micah Bader/Albert Lea Tribune 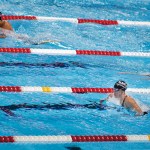 Lindsey Horejsi, right, competes in the women’s 200-meter breaststroke preliminaries in June during the U.S. Olympic Trials at CenturyLink Center in Omaha, Nebraska. Horejsi finished with a time of 2:31.41. – Colleen Harrison/Albert Lea Tribune

Ever since she was a child, Albert Lea native and standout swimmer Lindsey Horejsi has had dreams of Olympic proportions.

Horejsi said she originally got into swimming after her parents Sue and Mark signed her up for swimming lessons as a child. She said her parents wanted Horejsi and her sisters Amy and Krista to concentrate on three different areas — swimming, dancing and playing the piano — through sixth grade, at which point the girls could drop an activity if they chose to. While she liked playing the piano, Horejsi said she eventually had to drop lessons as they became too time consuming on top of her other activities. She said she continued with dance up through her junior year of high school through Joyce Matthies Dance Centre. Horejsi also competed in track and field for Albert Lea in alternating years (years where she didn’t have swimming trials obligations) from seventh to 11th grade.

Swimming, though, was a whole other story for her. Horejsi felt at home right away in the water, and said she joined Tiger Sharks when she was 6. She started swimming for Albert Lea High School in the seventh grade and joined USA Swimming in January 2012 as an eighth-grader. The rest is history.

Horejsi said she has always been someone who sets goals for herself, and that swimming in the Olympics has been one of her goals for a while now.

“It’s the biggest stage you can possibly find,” she said. “I have such a passion for swimming, I figured I might as well work for the biggest goal possible.”

This summer, she came within seconds of that dream, and four years from now, she plans to achieve it.

In this year’s 100-meter breaststroke, Horejsi placed 19th out of 125 listed swimmers in the preliminaries, moving up to 18th after one swimmer was disqualified. Horejsi just missed advancing to the event’s semifinals at the Trials with a time of 1:08.82. The swimmer to win the event was none other than Lilly King with a time of 1:05.20. King went on to win the gold medal in the event at the Rio Olympics earlier this month.

“The competition has gotten a lot faster, which is crazy — especially in the 100,” Horejsi said in an interview following her Olympic Trials performance. “I think 1:07 low made the team last Olympic Trials, which 1:07.0 barely made top eight this time. That’s just crazy to think about how you constantly get faster, and you think about ‘how can people keep getting this fast?’”

With Olympic and other international competitions being measured in meters, Horejsi said there are some adjustments to be made, as her high school events were measured out in yards. For example, she said she hits three different turns while swimming the 100-yard breaststroke, while there’s only one turn in the 100-meter event. Horejsi said this makes the stroke counts different, as well.

Her second Olympic Trials appearance capped off a pre-collegiate swimming career full of accomplishments. One of those accomplishments was Horejsi’s national record-setting performance at the girls’ Class A state swimming meet in November 2015 in Minneapolis. Horejsi broke the national high school record in the 100-yard breaststroke with a time of 58.56 seconds during the prelims at the University of Minnesota Aquatic Center. The previous record of 58.75 seconds was set in 2009 by Kasey Carlson of Las Lomas High School in California. Horejsi’s result earned her an All-American time and set the all-time state meet record and the Class A record for the event, as well, and she went on to win the event during the state meet finals.

“I was shocked,” Horejsi said after the meet. “I was kind of nervous about how I was going to swim, because you always worry about ‘did I work hard enough?’ and ‘did I do everything I could have possibly done?’ and then it comes down to it.”

For her high school coach Jon Schmitz, though, the result came as no surprise.

“She’s the fastest high school kid — ever — in that event. That was her goal all along. She’s worked her butt off for it. She’s sacrificed a lot,” he said. “I’m extremely proud of her.”

Horejsi’s record-breaking performance came almost one year after the teenager swam a time of 1:00.24 in the finals of the 100-yard breaststroke as part of the Mantas Swim Club, beating 118 opponents to earn a gold medal at the USA Junior National Championships on Dec. 13, 2014.

“I’d been working for it all year,” Horejsi said at the time. “State was a good meet for me, and I was excited to show people what I could do.”

This fall will be yet another chance for Horejsi to show people what she can do as she joins the University of Minnesota swimming program. After fielding offers from about 40 schools, Horejsi made her verbal commitment in September 2015. Horejsi — swimswam.com’s No. 10 recruit in the nation’s Class of 2016 — narrowed her search down to three schools: Minnesota, Tennessee and Southern California. She made official visits to Tennessee and Minnesota. Her official visit to USC was scheduled for fall 2015, but she canceled it after deciding to commit to the U of M.

“I just knew Minnesota was the place for me, so I didn’t want to waste any time,” Horejsi said at the time of her announcement. “Minnesota had the home-state feel, which I loved. From the weather to the people, everything up there is perfect. The campus is gorgeous, and I’ve always loved the pool.”

In an Albert Lea Tribune interview at the time, Horejsi’s parents said they stayed neutral in their daughter’s decision, but that they are excited to watch her compete for the Gophers.

“With her decision, she will be close, which enables us to see her swim at home meets,” Horejsi’s mother, Sue, said at the time. “The coaches are a great fit for Lindsey. They’ve been following her closely for five years.”

Horejsi will move up to the Twin Cities for college on Monday, and will start classes after Labor Day. She expects to start swimming with her new teammates sometime in September, as well. She said she has kept in shape over the summer by swimming at an outdoor pool in Mankato, and by training at the CrossFit Innerdrive gym in Austin that she has worked out at for years.

The next big step doesn’t worry Horejsi. While she’ll miss her family and friends in Albert Lea — as well as her dog, Bean — she considers herself to be an independent person, and knows she can rely on people she’s close with, like her older sisters who have gone through the college transition before.

“It will definitely be hard, but it will be a nice change, too,” Horejsi said. “It will be nice to be around people with the same goal in mind.”

In approaching her academic career as a Gopher, Horejsi said she is leaning toward becoming a registered nurse in the OB/GYN field, but doesn’t want to commit to anything just yet. She plans to focus on her general courses as she adjusts to her new swimming program. Athletically, she already has collegiate goals of competing at conference and national levels while also looking to break Big 10 and NCAA records — something she feels she is prepared to do, thanks to the solid foundation she has built while competing out of southern Minnesota.

As Horejsi now looks to focus on her collegiate swimming career at the U of M, she has no plans of stopping her quest for a spot on the U.S. Olympic team.

“That would be awesome,” she said of competing in the Olympics as part of Team USA. “It’d be after college and my collegiate season, so hopefully I’ll be at the peak of my career in swimming. We’ll have to see what happens.”