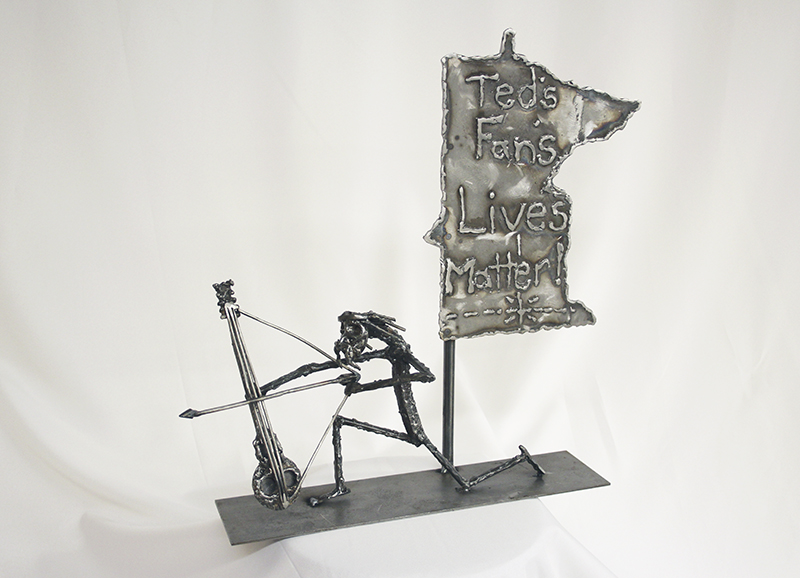 Jerry Olson of Albert Lea created this piece from steel that he intends to give to singer Ted Nugent when he performs on Friday at the Freeborn County Fair. - Sarah Stultz/Albert Lea Tribune

Tensions have risen from both those in favor and those opposed to his concert in the last few months.

In a statement released Sunday on Nugent’s Facebook page, he said seeing people angry about his upcoming performance shows, “Clearly I am doing God’s work.”

“Remember, if you’re not pissing off the (expletive), you are an (expletive)! Glory, glory hallelujah! Watch the devils squirm! Hopefully we will get photos/vid of the dopey protestors with their American Communist Party regalia xposing (sic) their disdain for personal hygiene. Precious!”

Nugent’s remarks appear to be made in response to the planned Rally for Civility Friday at New Denmark Park, which was organized in opposition to his performance later that night. Nugent’s performance — and the opposition against it — have gained attention statewide.

A column in the Minneapolis Star Tribune this weekend about the performance and rally has drawn discussion on social media from both locals and people in other areas.

In a press release, rally organizer Jennifer Vogt-Erickson said the Rally for Civility will emphasize community spirit and inclusiveness. Musicians from the community plan to perform live music, including folk tunes. A children’s carnival with arts, crafts, games and prizes is also planned.

“This free event will provide at least a small counterweight to the divisive and abusive language that Ted Nugent, who’ll be performing at the county fair that night, frequently uses at his concerts and during interviews,” Vogt-Erickson said in the release.

She said Nugent’s comments were to his advantage in selling online tickets. She said she thinks the attention allows him to stay relevant and that Nugent’s First Amendment rights mean he will not be jailed for his views, but do not protect him in a business transaction — something she said his contract with the Freeborn County Fair Board is.

Vogt-Erickson deemed Nugent as divisive and said she thinks Nugent is a part of what she deems as a current lack of civility in politics.

She said Nugent does not meet the criteria of Freeborn County’s Choose Civility campaign, noting her belief that it will be interesting to see whether local officials stand by the campaign.

Albert Lea resident Amanda Lester said though she is glad she lives in a country where First Amendment rights are protected, she does not think Nugent’s performance should be publicly funded.

She said fair performers should be as apolitical as possible, noting her belief that the fair board should be more aware of performers’ history in lieu of a conversation she said she had with a board member.

Freeborn County Fair board member Mike Woitas said he and the other board members are looking forward to a good night of entertainment.

“It should be a packed house at the fair,” Woitas said.

Jerry Olson — who made steel art with the words “Ted’s Fan’s Lives Matter” on it — expressed support for Nugent. He said he plans to offer the art to Nugent.

“He’s just a guy trying to make a living and then there’s the haters out there that are trying to keep him from being able to because they have their own agenda,” Olson said, noting that Nugent was approached by the fair board to perform.

“So if these do-gooders didn’t want him here they should have nipped it in the bud a year ago before the contract was made.”