MINNEAPOLIS — Republican presidential candidate Donald Trump is making his first visit to Minnesota this campaign, but not for any public appearance.

Trump is meeting with wealthy Republican donors to raise money, and doesn’t plan a public rally. 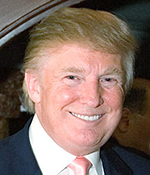 Suggested donations for the Trump event at the Minneapolis Convention Center are $1,000 to $100,000 per couple.

Trump drew condemnation from some in Minnesota’s large Somali community ahead of his arrival. Jaylani Hussein, director of the Minnesota chapter of the Council on American-Islamic Relations, criticized Trump for “anti-Muslim and anti-Somali rhetoric.”

The visit comes days after Trump announced a campaign shake-up with a new chief executive and campaign manager and as he trails in the polls.