Warren G. Ditlevson, 92, of Fergus Falls went home to be with his Lord and Savior on Thursday, Aug. 4, 2016, at Woodland Lodge in Fergus Falls. 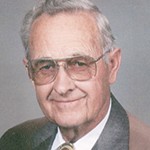 Warren was born Sept. 10, 1923, to Edward and Caroline Ditlevson. He attended school in Geneva and Albert Lea. Warren loved to roller skate and that’s where he met and swept Helen Collins off her feet. They later married and farmed in Myrtle and then in Clarks Grove, where they farmed for many years. Warren raised dairy cattle, farmed the land and raised three daughters: Janalie, Donna and Sybil there. Warren enjoyed riding horseback with his daughters and got involved in the youth group annual hayrides. He also got involved in 4-H with his daughters and their animals. After Warren retired from farming he became the boiler operator manager for Brookside Elementary School in Albert Lea. He was a member of First Baptist Church and was very active in the church, where he served as a deacon and head usher.

Warren had a special gift where he was able to strike up a conversation with anyone, anywhere, about anything. He made friends in an instant with his warm and friendly personality.

He was preceded in death by his parents; his loving wife, Helen; three brothers; two sisters; and two nephews.