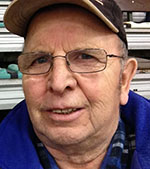 Wilford was raised, along with nine brothers and sisters, on the family farm in rural Kensett and was educated in the country school, Brookfield 7. Wilford was baptized and confirmed at Elk Creek Lutheran Church in rural Iowa and served his country in the Army National Guard from 1959 to 1967. In June of 1967, he was united in marriage to Karen Erickson Dokken at Elk Creek Lutheran Church.

He had varied occupations which included working in the sugar beet plant in Mason City, truck driving, construction and in the meatpacking industry. He was employed by Wilson & Co./Farmstead for 29 years in the hide cellar and smoked meats departments. During this time, he was a union steward for his local union. In 1977, Wilford took an early retirement from Farmstead and began farming full time on land he and his wife purchased north of Armstrong.

Wilford was preceded in death by his parents; three sisters, Mary, Hazel and Barbara; and three brothers, Sam, James and Leslie.

He loved having coffee with his friends at Nancy’s Cafe in Albert Lea — where he and his“coffee buddies frequently practiced the art of debate, often offering solutions to the various problems facing the world. He also enjoyed fishing with family and friends in Alexandria which included the frequent sharing of a number of fish stories. However, his biggest joy, was farming the land he was so proud to be a steward of. His grandchildren were the light of his life. Whenever any grandchild needed a sweet treat, they knew where to go.

A visitation is planned from 5 to 7 p.m. Sept. 8 at Harbor of Joy Lutheran Church in Milford, Iowa, and will be one hour prior to services at the church. A memorial service will be at 11 a.m. Sept. 9 at Crane Chapel in Austin.

Memorials received will be given to Relay for Life, The Care House in Deeside, Jamaica, and New Life Foundation in Tanzania.