William George Miskoff, 94, of Hutchinson passed away on Friday, Aug. 19, 2016, at Golden Living Center in Excelsior. Graveside services were at 11 a.m. Wednesday at Freeborn City Cemetery in Freeborn. The Rev. Vicki Toutges officiated and military honors were conducted by the Freeborn County honor guard. 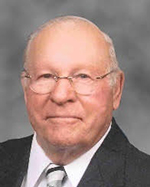 William George Miskoff was born April 16, 1922, in New Richland. He was the son of John and Lena (Maskolov) Miskoff. William was baptized as an infant and was later confirmed in his faith as a youth. He received his education in New Richland, and was a graduate of New Richland High School class of 1940. William furthered his education at Austin Junior College and North Western College of Chiropractic. He graduated with a doctorate degree in chiropractics.

William entered active military service on Dec. 6, 1943, in the United States Army Air Corp and served his country during World War II in Central Europe. He received a Good Conduct Medal, an Air Medal and a distinguished unit badge. He received an Honorable Discharge on Sept. 13, 1945, in Camp McCoy, Wisconsin.

On July 24, 1944, William was united in marriage to Gladys Hinkley at the parsonage in Tucson, Arizona. This marriage was blessed with one daughter, Sharon Kay Miskoff. William and Gladys resided in Hutchinson. They shared 70 years of marriage until Gladys passed away Nov. 28, 2014.

William was an avid outdoorsman as he enjoyed hunting, fishing and trap shooting in his free time. William was in the Amateur Trap Shooters Hall of Fame. He loved to spend time at his cabin on Lake Minnebelle in Meeker County. He also enjoyed watching all sports teams on TV. He especially enjoyed spending time with his family, grandchildren, great-grandchildren and many friends.

William is preceded in death by his parents John and Lena Miskoff; wife, Gladys Miskoff; daughter, Sharon Kay Gilbertson; brother, Victor Miskoff and his wife, Marcella; and sisters Pola Jedloh and her husband, Wilbert, Zinna Findlayson and her husband, Sidney, and Lola Hagen.

Arrangements by the Dobratz-Hantge Chapel in Hutchinson.