An Albert Lea woman accused of running over a motorcycle with a vehicle in a domestic incident in July was placed on unsupervised probation for one year Tuesday in Freeborn County District Court. 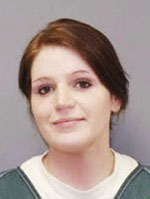 Haley Jade Dorman, 23, was sentenced to 90 days in jail after pleading guilty to failing to stop at a collision. She was given credit for two days served, and 88 days were stayed.

Before sentencing, public defender Michael Ryan said though Dorman’s actions were not appropriate, reasonable grievances had led her to snap.

District Court Judge Ross Leuning said though he understood the situation was a culmination of disagreements between the two, Dorman’s use of a vehicle was not appropriate.

“When you use a motor vehicle as a weapon, you can be charged with a very serious offense,” he said.

Leuning deemed the outcome of the trial as lucky for Dorman, but appropriate.

Court documents state an Albert Lea Police Department officer was dispatched July 12 to Shopko in Albert Lea on a report of a domestic incident over a motorcycle being run over by a suspect.

The victim said Dorman  — his ex-girlfriend  — pushed him and pushed the motorcycle into the car it was parked next to, causing damage to the vehicle.

The victim stated Dorman entered her vehicle and drove toward him and the motorcycle he had picked up, striking him on his right side and striking the motorcycle, pushing it across the lot before fleeing the scene.