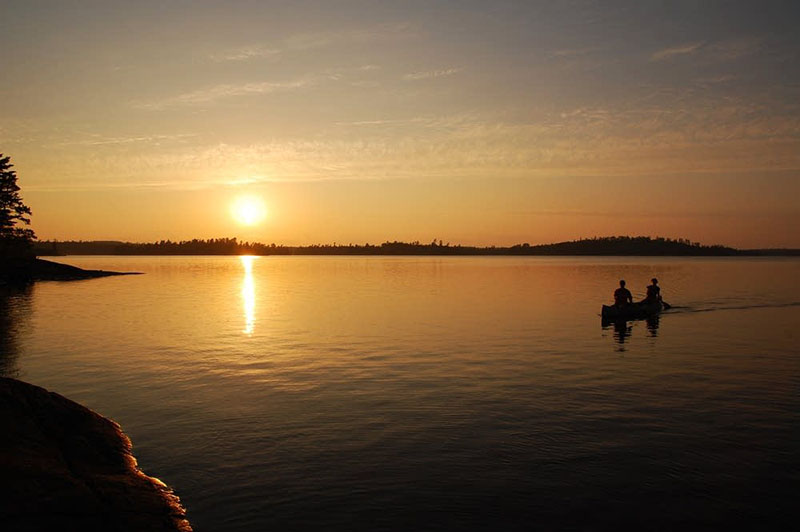 The sun sets as two paddlers make their way across Lac La Croix in the BWCA in 2011. Nathaniel Minor/MPR News 2011

Boatloads of canoeists are expected to paddle into the Boundary Waters Canoe Area Wilderness this Labor Day weekend, something outfitters and Forest Service officials hope will contribute to a rebound in visits to the popular recreation area.

But if recent trends continue, those paddlers will be quite a bit older than they used to be.

New figures from the U.S. Forest Service show a recent uptick in visits to the BWCA. In 2015, the agency issued permits to more than 143,000 people, about 10,000 more than the previous year.

Overall since 2010, there’s been a slow and steady decline in visitors, especially among younger people.

“People are looking for a quick return on their vacation,” said John Schiefelbein, who has run North Country Canoe Outfitters outside Ely for the past 33 years. “’I want to go out and do my adventure this afternoon and tonight I want to be able to post it, so all my friends know what I’m doing.’ And you can’t do that here.”

That mirrors what Schiefelbein has seen. His average visitors are now in their 40s and 50s, he said.

Fewer adults seem to have had outdoor experiences growing up, he said. “As they become parents, their children aren’t going to be exposed to it. And that snowball keeps rolling downhill getting bigger and bigger.”

But some younger people are still venturing north to explore the lakes and rivers of Minnesota’s canoe country. Last week, Schiefelbein helped outfit 30-something sisters Courtney and Mikki Brenna of the Twin Cities for a weekend trip into the Boundary Waters.

“It’s beautiful and peaceful and quiet, you just don’t have any place like it,” said Courtney.

The two were hoping to spot a moose and venture farther into the wilderness than on past trips. But both said most of their friends don’t come to the Boundary Waters.

“I think there’s a lot of fear going all the way up into the woods where your phone doesn’t work,” Mikki said.

Those trends are concerning to Gus Smith, Kawishiwi District Ranger for the Superior National Forest in Ely.

“We need to start investing in our future today — or five years ago — so that we have that group that takes their kids and their grandkids into the Boundary Waters,” he said. “So the next generation is grabbing that same enjoyment that they got when they were kids out on their parents’ trip.”

The Forest Service is partnering with groups to reach younger people and others who traditionally haven’t visited the Boundary Waters.

Groups like the Boy Scouts and the YMCA are still bringing young people into the wilderness and Forest Service permit statistics don’t include trips nonprofit groups lead into the area.

YMCA Twin Cities operates three camps at the edge of the BWCA, which combined send nearly 1,500 kids into the wilderness every summer.

“One of the benefits to our camps is the parents don’t have to go on the trip, the kids can go with us,” said director of camping Tom Kranz, who added that Camp Widjiwagan outside Ely had record camper attendance this summer.

“When I was a kid, my parents went on a trip with us. When my kids were growing up, I went on trips with them. [Today] it is challenging for some families to want to do that,” he said.

Families are busy, kids have sports and other conflicts, and trips to the Boundary Waters can be challenging, as anyone who’s ever survived a grueling portage can attest.

That’s one of the reasons why Ada Igoe argues millennials should visit the Boundary Waters. The 31-year old runs Tuscarora Lodge & Canoe Outfitters on the Gunflint Trail, and recently wrote a blog post called “10 Reasons to Canoe Trip as a 20-something.”

“If you want to see some of these areas, you need to go now, because it’s never going to be easier for you to do it,” she said.

Igoe has seen the Forest Service statistics, but says she’s frustrated by the perception that only “geriatrics” visit the wilderness. That doesn’t reflect what she’s seen since she bought the business last year with her partner.

“The thing that surprised me a lot was how many young people we do see through here,” she said. “We see a lot of college-age kids, a lot of young adults, in their 20s or early 30s taking canoe trips.”

Igoe believes the Forest Service may have undercounted young people in its surveys, which it conducted at popular entry points. Many young people, she said, leave on trips directly from outfitters, and not at public entry points, because they often don’t own their own equipment.

Regardless, Forest Service ranger Gus Smith says the key moving forward is whether young visitors will come back for repeat visits like earlier generations did, and then come back again with their kids.

Traditionally, many visitors, like Mike O’Keefe from Stevens Point, Wis., have returned to the Boundary Waters year after year.

Last week he wrapped up a six-day trip of fishing, waterfall viewing, and even cheese curd roasting with his son and two grandsons.

There were a lot of people in the wilderness, he said, “Parents with young children, parents with a newborn. So there are people still introducing this environment to their kids, which is great.”

He’s anxious to see whether those numbers are reflected in Forest Service statistics next year — perhaps showing a new trend away from the slow decline in visits to what is still one of the country’s most popular wilderness areas.