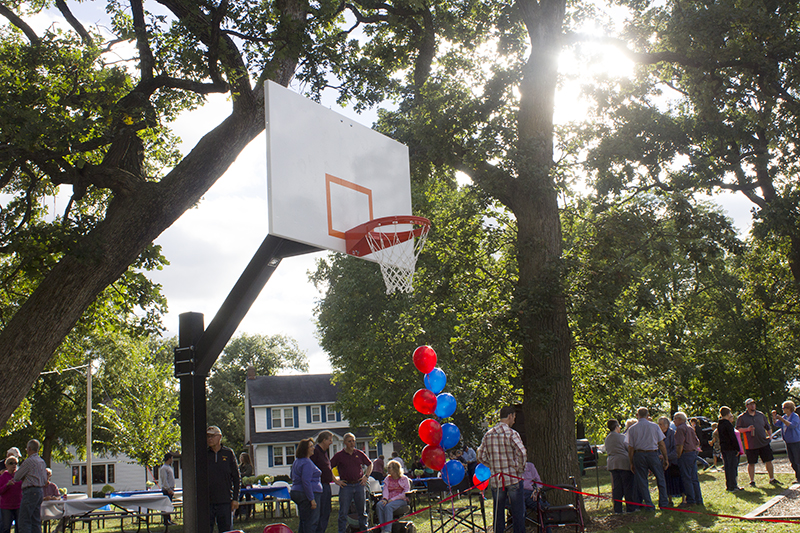 Dozens of friends, family and community members gathered Saturday at Oakwood Park to dedicate a basketball hoop and celebrate the life of an Albert Lea native who died earlier this year.

The hoop at the park was dedicated to Ryan Moore, who died from leukemia in early May, as part of the annual Oakwood Picnic, which featured food, drinks and socialization.

Moore was a retired high school and college basketball player, and was described as being passionate about all sports  —  especially Minnesota teams.

Classmate and friend Trent Miller attended the ceremony from the Twin Cities. 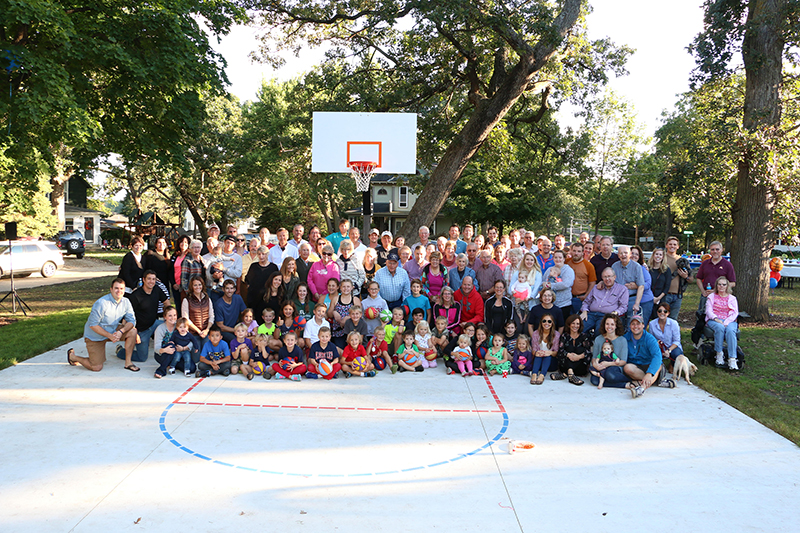 The basketball hoop was dedicated for Ryan Moore at the 67th annual Oakwood Neighborhood Picnic. -Provided

“It’s cool to have a lasting memory of that when I come back with my family to visit,” he said.

Miller described Moore as a great guy who played a critical role with basketball in Albert Lea.

“He’s such an awesome guy, and I just look at him as the glue that held our group of friends area to retire or raise a family.

together and who held the basketball team together. That’s how we will remember him,” he said.

Moore always looked out for his friends, Miller said.

“He was somebody that if you didn’t see him for a couple months, a couple of weeks, you’d see him and it was just like yesterday,” he said. “You pick up where you left off. He always had your back.”

The court includes a bench with the No. 5 — Moore’s Albert Lea High School basketball number — ingrained on it and a plaque with Moore’s jersey on it. 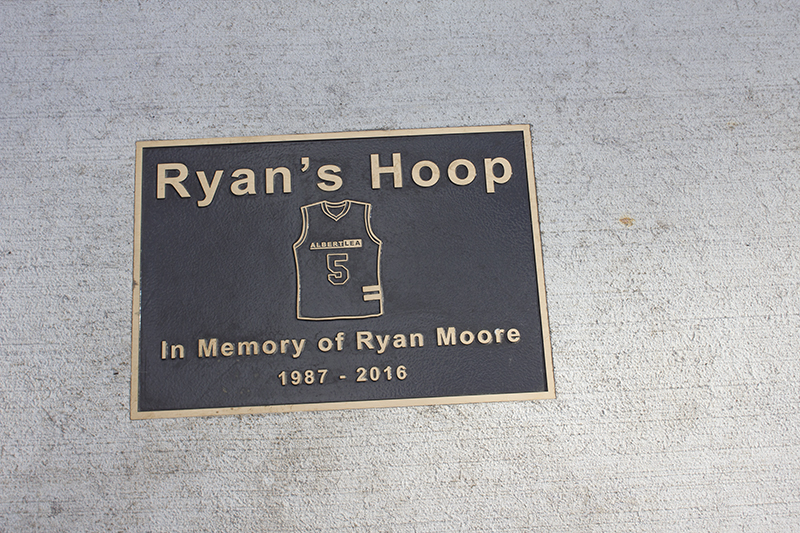 A plaque bearing Moore’s No. 5 Albert Lea High School jersey is on display at the court dedicated to him at Oakwood Park. — Sam Wilmes/Albert Lea Tribune

Heidi McGill — whose brother, Andrew Irvine, was a best friend to Moore — thanked businesses that helped with constructing the court.

“It’s been overwhelming, the amount of generosity in the community to make sure this court got in this year,” McGill said, noting she remembered Moore for his friendly demeanor.

“I remember his smile,” she said. “He always had a hug for you every time he saw you. He was the All-American kid.”

“It was just a great friendship, a very deep friendship,” he said. “I cherish everything we had.”

Irvine remembered Moore shooting hoops in his driveway across the street from Oakwood Park.

“He would have loved to have this court,” he said.

Moore’s mother, Suzanne Moore, said she was honored to be his mother.

“You just knew when he talked to you, you were the one he was concentrating on,” she said, noting her pleasure in seeing dozens of people attend the dedication in her son’s memory.

“I look out and see all of these people, and they came because of Ryan,” Suzanne Moore said.

She remembered her son as being busy most of the time and always finding time to make other people feel welcome.

“He made you feel special,” she said.

Moore was described as kind-hearted, bright, energetic, silly and curious by friends and family.