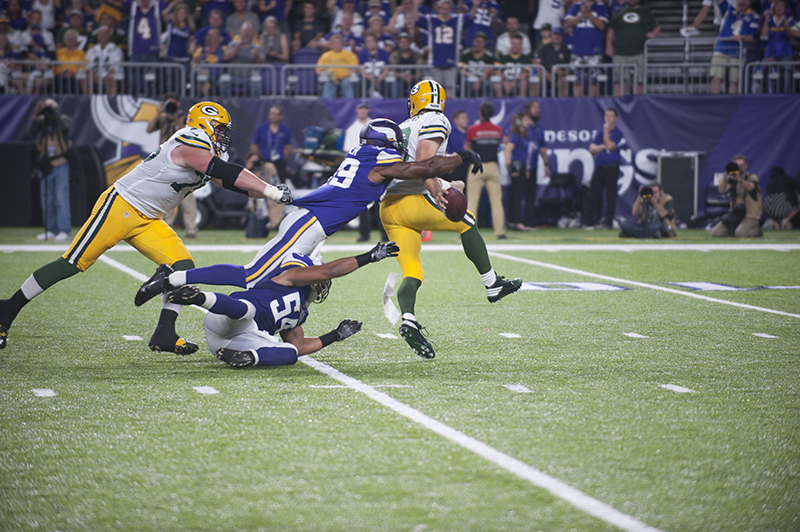 Minnesota Vikings defensive end Danielle Hunter reaches out to sack Green Bay quarterback Aaron Rodgers in the first half of the Vikings' 17-14 win over the Packers.

Sam Bradford had a Minnesota debut almost as dazzling as the new $1.1 billion building itself, completing 22 of 31 passes for 286 yards, two touchdowns and no turnovers to lead the Vikings to a 17-14 victory over the Green Bay Packers on Sunday night just 15 days after he arrived in a trade. “He can throw the ball,” Vikings coach Mike Zimmer said. “He’s got some toughness about him, and this isn’t his first rodeo.” The defense did the rest, harassing Aaron Rodgers for five sacks and two fourth-quarter turnovers that quashed the comeback and sent the crowd of 66,813 into a deafening frenzy in celebration of the first regular season game at U.S. Bank Stadium. “I don’t think this is anything to get super crazy about,” Rodgers said. “It’s a tough opponent, a division opponent. They’re a good football team. They’ve still got to come to our place later in the season. Hopefully we’re in a position to play for something then.” 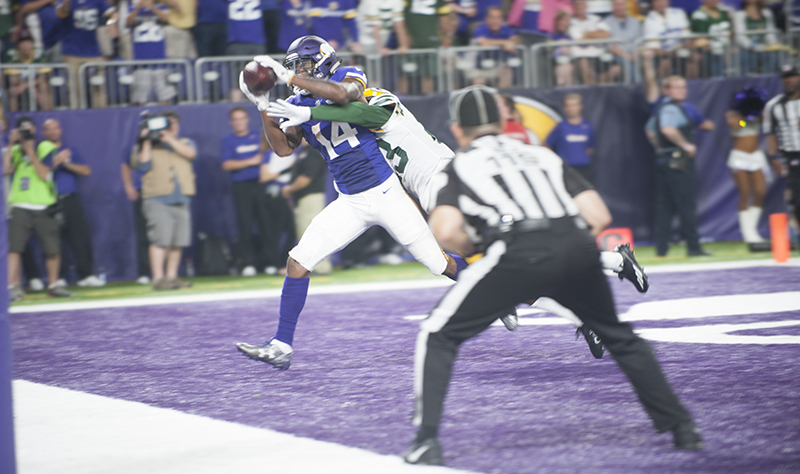 Adrian Peterson limped off in the third quarter with a right knee injury, and only 19 yards on 12 carries, but the Vikings (2-0) proved they still have a lot of options. Stefon Diggs caught nine passes for 182 yards and a touchdown. They held the Packers (1-1) to 65 total yards in the first half, withstanding an early touchdown pass by Rodgers to Jordy Nelson on a drive aided by two penalties by cornerback Terence Newman.

“They didn’t win the division last year by accident. You do have to give them their credit,” said Mike Daniels, who had one of Green Bay’s four sacks.

Trae Waynes, who had two penalties himself, intercepted Rodgers’ pass in Vikings territory with 1:50 left to seal the victory. The previous drive was killed with a strip sack by Brian Robison, when Shamar Stephen recovered at the Minnesota 44 with 6:53 remaining.

Rodgers, who ran for 29 yards and a touchdown, began to find a groove throwing the ball down the stretch. He finished 12 for 21 for 154 yards in the second half, but Bradford was the better quarterback on this night.

The Vikings, who aggressively traded two premium draft picks including next year’s first-rounder to Philadelphia to fetch Bradford after Teddy Bridgewater went down with a massive left knee injury, boldly eschewed a field goal try early in the second quarter. 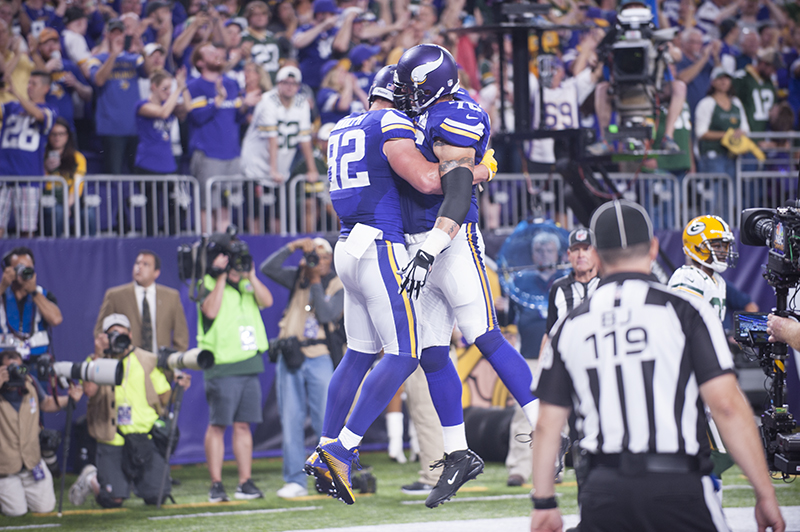 Bradford found Diggs for a 4-yard completion on fourth-and-1 from the 18. Then he hit Kyle Rudolph for an 8-yard touchdown pass three plays later.

“When quarterbacks and receivers are on time, they’re very tough to stop,” said Packers cornerback Damarious Randall, who was matched up with Diggs for most of the game.

Bradford was hit hard on his non-throwing hand by Packers outside linebacker Clay Matthews while following through on a pass at one point during the drive. He visited the locker room briefly for further examination but never missed a snap, despite significant swelling beneath his left pinky.

There were only a couple of instances that even hinted of newness for Bradford and the offense, when one throw on the first drive sailed well past where Rudolph’s route ended and another later in the first quarter was in the air too quickly for Rudolph to turn around.

“These guys have had my back from day one,” Bradford said. 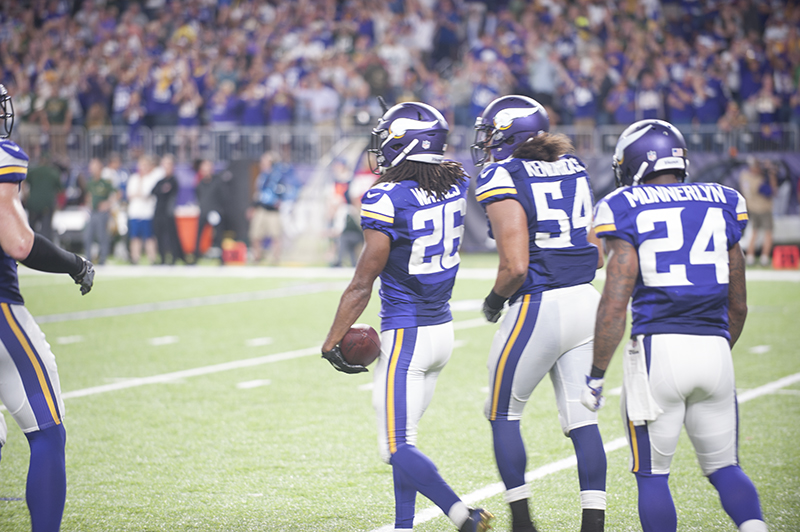 Peterson, who was on crutches after the game and wearing a brace on his right leg, will have an MRI exam on today. Zimmer said he was told the injury had already “calmed down” afterward.

“He might miss a week. I don’t know if he will or not,” Zimmer said.

Davante Adams fumbled at his own 13 on Green Bay’s first play, a short completed pass, when Eric Kendricks punched the ball out and Andrew Sendejo picked it up with an eye toward the end zone. Packers wide receiver Randall Cobb wrestled him down and stripped the ball in the process, recovering it himself. Each team was charged with a turnover because of the change of possession.

The Packers played their first two regular season games on the road for the first time since — wait for it — 1924. They played at the Duluth Kelleys and Chicago Cardinals that year before returning home.