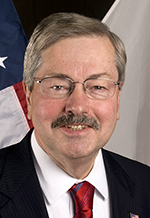 The governor said he believes damages will top the $4.3 million figure needed to trigger federal infrastructure aid for cities and counties and assistance for affected individuals and businesses.

“From what we’ve seen it’s very likely” that Iowa will qualify for a presidential emergency declaration, Branstad told reporters at his weekly news conference, especially given that weather-related issues earlier this year in Iowa qualified for federal assistance and the current situation along the Cedar River is significantly worse.

“We thank the Good Lord we haven’t had more rain,” said Branstad as officials monitored the flow of the swollen Cedar River.

Branstad said state officials will meticulously gather damage reports in the coming days with the expectation of seeking federal matching money of 75 percent on top of the state and local emergency spending.

The governor’s proclamation allows state resources to be used to respond to and recover from the effects of this severe flooding and activates the Iowa Individual Assistance Program for residents of the 17 affected counties.

Also, he announced that more than 300 members of the Iowa National Guard and 53 members of the Iowa State Patrol were assisting the city of Cedar Rapids for access control in evacuated areas which will allow local law enforcement officers to concentrate on other flood-related activities.

Overall, Maj. Gen. Timothy Orr, the adjutant general of the Iowa National Guard, said 412 soldiers were mobilized to provide support to local law enforcement at 75 evacuation control points beginning Monday in Cedar Rapids and Palo as flood waters along the Cedar River approach today’s projected crest, officials say. That compared to about 4,000 during the record flooding of 2008.

“I don’t think I can ever remember a year when we have not had a disaster of some kind — some small, some of significance,” said Branstad, who praised the preparation and planning that took place in advance of this month’s flooding. “I’m especially proud of the preparation that has gone on this time and, hopefully, that’s going to mitigate the extent of the damages.”

Mark Schouten, director of the Iowa Department of Homeland Security and Emergency Management, said he has teams assessing damage in affected counties with expectations of requesting a presidential disaster declaration if damages to the $4.3 million federal threshold.

The state individual assistance program currently in effect provides grants of up to $5,000 for households with incomes up to 200 percent of the current federal poverty level — or a maximum annual income of $40,320 — for a family of three.

Grants are available for home or car repairs, replacement of clothing or food and for the expense of temporary housing, officials said. Original receipts are required for those seeking reimbursement for actual expenses related to storm recovery.

The grant application and instructions are available on the Iowa Department of Human Services website. Potential applicants have 45 days from the date of the proclamation to submit a claim.