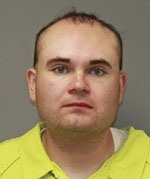 Authorities have stated Brown was found dead in a locked 2001 Audi station wagon the evening of Aug. 23 in a parking lot near the Big Island pavilion after dispatchers received a 911 call from Easter.

Easter reportedly told dispatchers he had shot Brown in self-defense and claimed Brown approached him with what appeared to be a bat.

Easter’s wife and infant daughter were also reportedly at the pavilion at the time of the shooting but were not injured.

Authorities stated last month evidence does not show the shooting was in self-defense.

In an interview with law enforcement, Easter’s wife said her husband had confronted the victim at the victim’s car and the two had exchanged words, but she noted she did not hear everything they were saying, court documents state. She said she heard the victim tell her husband to stop shining his light on him, before hearing two gunshots and seeing that her husband had shot the other man.

Easter was released from jail Sept. 23 after he posted a $100,000 bond issued by District Court Judge Steven Schwab.