Celebrating ‘stewards of the land’ 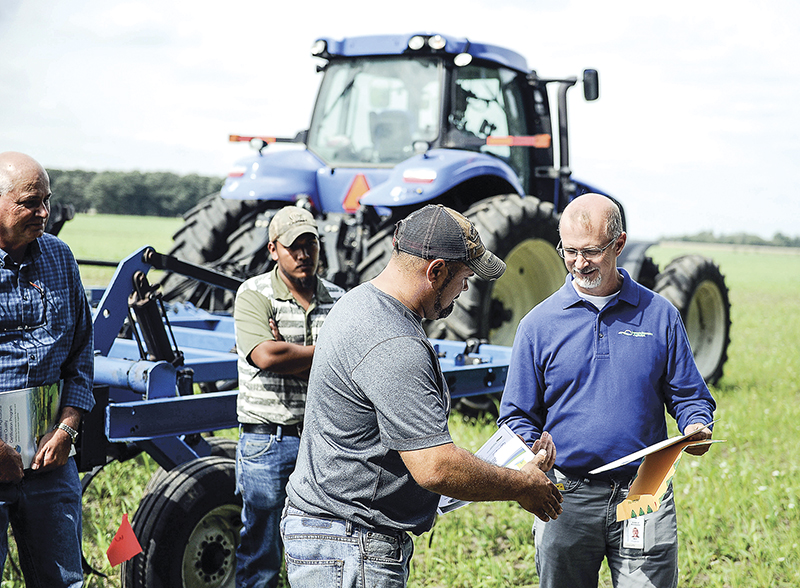 That was the key message farmers and state officials shared when they gathered Thursday afternoon near the border of Mower and Freeborn counties for the Minnesota Department of Agriculture to recognize a group of farmers for becoming certified under the Minnesota Agricultural Water Quality Certification Program. 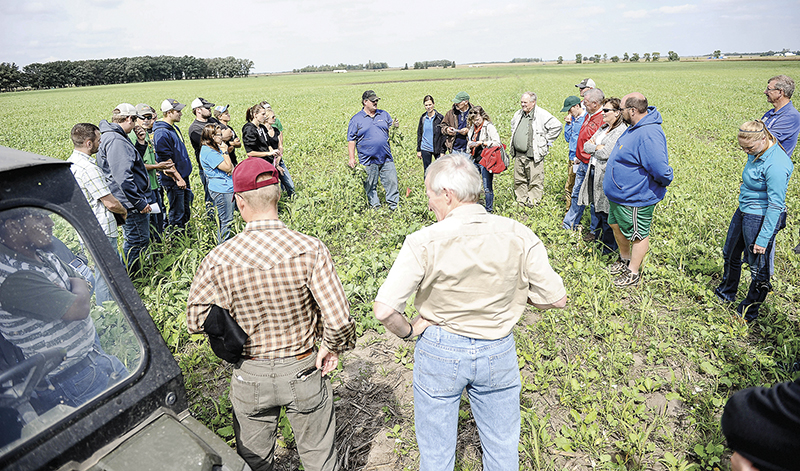 TJ Kartes of Saddle Butte Ag Inc. talks to a tour group about the benefits of cover crops on a field belonging to Tom Cotter on Thursday afternoon. – Eric Johnson/Albert Lea Tribune

“Agriculture and water quality can work together, and we can meet the expectations of both and this particular program shows that that is possible,” said Steve Lawler, a Mower County Soil and Water and Conservation District resource specialist. 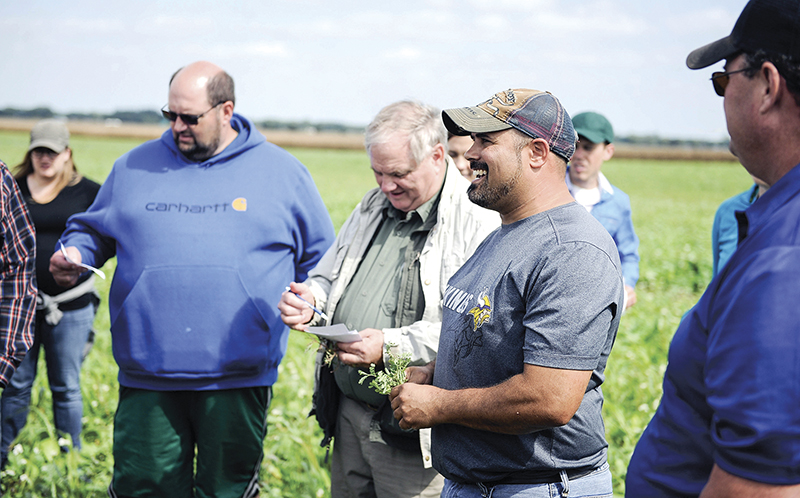 Tom Cotter, who farms with his father, Michael Cotter, hosted a field stop on his land just southwest of Austin in Mower and Freeborn counties. He shared news of his recognition on Facebook and received a positive response.

“I cannot believe the people from town that said, ‘Thank you,’” he said. “City people really appreciate it. And that’s good; that’s what I want. I want the city, town people to appreciate farmers and be thankful, because it’s not an easy job.”

MAWQCP is a voluntary program formed by Gov. Mark Dayton that works with farmers and local soil and water conservation districts to identify and fix risks to water quality on a field-by-field, whole farm basis.

MAWQCP Program Manager Brad Redlin described the program as a risk assessment approach where the state tracks operations, management, the land type, crop varieties and much more to see that a farm meets state standards.

“It’s key to us that we have the opportunity to provide the support and the means to get certified,” Redlin said.

Producers who treat all risks to water quality on their operation are certified and deemed to be in compliance with new water quality rules and laws for 10 years. To date, the state has certified more than 240 farmers in 55 counties for more than 140,000 acres in just over a year.

Mark Root, MDA’s regional MAWQCP certification specialist for 11 southeast Minnesota counties, said the Cotters stood out for their use of cover crops.

“The cover crops are extremely good for erosion,” Root said. “It’s probably one of the best things he’s doing.”

The Cotters farm corn, soybeans and canning vegetables. They’ve used cover crops to mitigate erosion and nutrient levels on their fields, and it serves as prime grazing land for their cattle. The soil health team gathered Thursday on a field the Cotters harvested for sweet corn last month and planted a variety of cover crops soon after.

Lawler liked what he saw on the Cotters’ field. As he picked out the varieties of plants, he noted cover crops don’t just help protect against erosion, they utilize excess nutrients that could leach into tile systems and they help with wind and water erosion.

“This is going to help protect soil, improve soil quality,” he said.

Root agreed, and added that in recent years cover crops have gained more attention in Minnesota and he expects that to continue.

“I think it’s going to be the wave of the future,” Root said.

In August, Dayton declared a Year of Water Action in Minnesota and is asking all Minnesotans to do their part to protect and preserve what he calls the state’s most important natural resource. He said farmers are the original stewards of the land and water and becoming certified is one of five actions the governor is asking farmers to consider taking to continue protecting lakes, rivers, streams and groundwater. A complete list of water-friendly actions for farmers and landowners can be found at mn.gov/governor/issues/wateraction.

Farmers and landowners can get started in the MAWQCP by contacting their local soil and water conservation district office.

“It’s something Minnesotans at large should all be very proud of,” Redlin said.