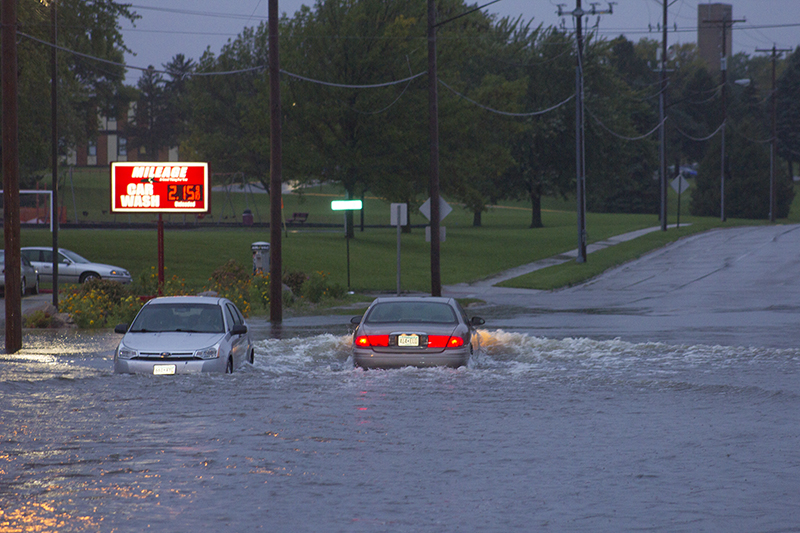 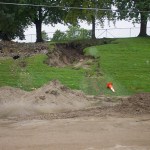 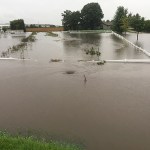 A field on the north side of Hammer Road is flooded this morning after heavy rains fell on the area overnight. – Rich Mirelli/Albert Lea Tribune 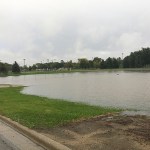 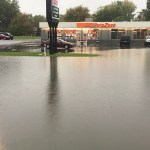 The road in front of Auto Zone in Albert Lea was covered in water this morning. 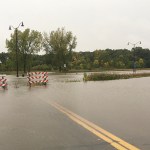 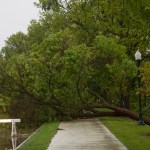 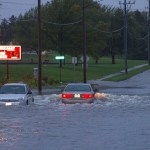 By Sam Wilmes and Sarah Stultz

The National Weather Service has issued a flood warning for Albert Lea and the surrounding areas after heavy rainfall overnight.

Rain totals collected at the Albert Lea wastewater treatment plant totaled 4.6 inches from 8 a.m. Wednesday through 8 a.m. today., though reports of as much as 7 inches have been received from Freeborn County officials.

The weather led to a two-hour delay at Alden-Conger School and canceled classes at NRHEG. Schools started on time at Albert Lea Area Schools.

Several reports of flooded streets have been reported in Albert Lea, and it was unclear as of press time if any Freeborn County roads have closed.

According to Albert Lea police, Lakeview Boulevard was reduced to one lane as part of the hill that Lakeview Elementary School sits on has washed into the street. No injuries have been reported.

Several trees were also reported downed, and many people reported water in their basements.

According to the Albert Lea Police Department, the following reports were received as of press time:

• A large branch was reported down and on a house with a line hanging over Hope Lane at 11:17 p.m. Wednesday at 610 Sheridan St.

• A large tree was reported down in an area, completely blocking the road at 11:41 p.m. Wednesday on the 2300 block of Gene Ave.

• A trailer was reported in a neighbor’s yard at 11:46 p.m. Wednesday at the intersection of Meredith Road and Ridge Road.

• A tree was reported down on an Albert Lea garage. A power line to the house was reported hanging, but no sparking was observed.

• A car was reported abandoned in the intersection of West Main Street and South St. Mary Avenue. The car reportedly had water over its hood at 2:33 a.m. today.

People are advised not to drive through flood areas. The Weather Service advises people to turn around when they encounter flooded roads.

The Freeborn County Sheriff’s Office has also issued a no wake warning for today.