Clarence A. Aase, 99, of Mondovi, Wisconsin, passed away peacefully on Sept. 10, 2016, at American Lutheran Home of Mondovi. 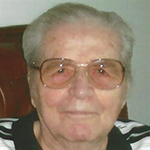 On March 19, 1939, Clarence was united in marriage to Ruby Schultz at the Lutheran Church parsonage in Mondovi. To this union, two sons were born. Together, Clarence and his wife farmed in West Bennett Valley until they moved to Mondovi. Clarence spent several years as an employee at the Farmers Store. Clarence then began a career as a butcher at Gunderson Meat Lockers in Mondovi until his retirement. Clarence, during his retirement, was a funeral assistant for the Edison funeral home and later the Poeschel funeral home.

Clarence had a love for horses. When it came time to sell his horses, he sold them to family so he could go and visit them.

He will be long remembered for his love of the Lord, a kind and gentle man with a dry, yet quick humor. He was a playful man with a deep devotion for his entire family. His face would beam whenever he saw them.

Clarence will be sadly missed by his wife of the past 77 years, Ruby, of Mondovi; sons Galen and Audrey of Mondovi and Loren and Kathryn of Albert Lea; grandchildren Michael C. (Pam) Aase, Beth Kanthak, Kristi (Jeff) Mecikalski, Becky (Tom) Kuntz, Deanne (Andrew) Fefer, Dawn (Jeff) Messner and Bryan (Christie) Aase; great-grandchildren Michael B., Lauren, Mercedez, Austin, Cole, Nora, Benjamin whom shared a birthday with his great-grandpa, and Carson. He was also by nieces, nephews, other relatives and friends both young and old.

Besides his parents, Clarence was preceded in death by his siblings Ella Hovey, Isabelle Rosenthal, Bendick Aase and Inez Lunderville.

Funeral services for Clarence will be at 11 a.m. Saturday at Zion Lutheran Church in Mondovi. The Rev. Norman Ruthenbeck will officiate. Burial will follow at Riverside Cemetery in Mondovi. Visitation will be from 4 to 7 p.m. Friday at Talbot Family Funeral Home chapel in Mondovi and again one hour prior to the service Saturday at the church.