Conger businessman steps out onto his own 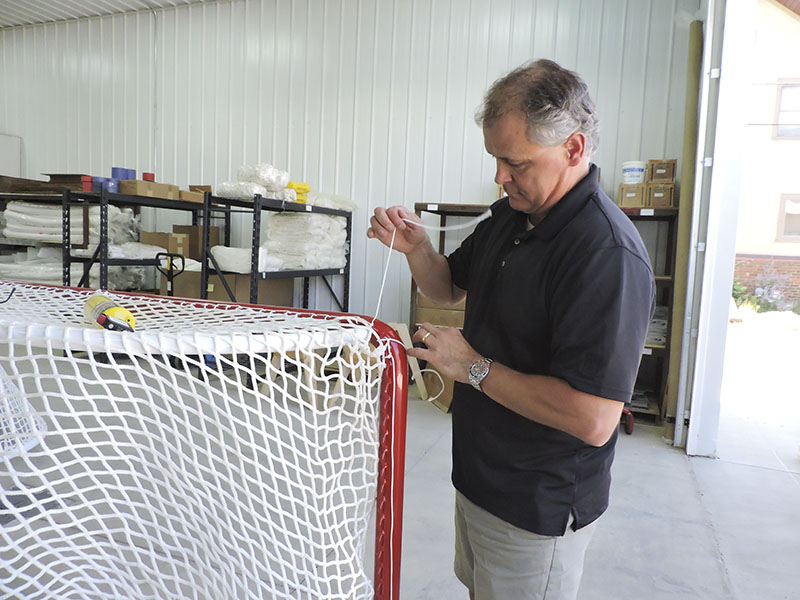 All American Arena Products owner Sean Passingham strings together a hockey goal net which will be sent to a customer from his facility in Alden. - Kelly Wassenberg/Albert Lea Tribune

ALDEN — A Conger man has found success in his own business.

Sean Passingham, president and CEO of All American Arena Products, branched out on his own after working in the ice arena industry for over a decade. In 2013, Passingham, founded his business and began working from home and a couple of storage units. Most recently, he found himself a new home in the R & R Flooring building in Alden.

“I moved in and it’s worked out really well as far as warehousing and having everything organized under one roof,” Passingham said of the move.

Along with offices, he now has warehouse space to work on some of the smaller items the company ships directly to its customers. This includes items such as hockey goal posts, netting and other smaller rink accessories. The business also drop ships items and travels across the country installing its products.

Area residents should note that Passingham doesn’t sell hockey pucks and helmets. Instead, he exclusively works with hockey rink owners, managers and  sometimes cities, counties and municipalities on getting hockey rinks open and keeping them stocked with the proper hockey accessories to ensure their business’ success.

In the short time since AAAP’s inception, sales have climbed over 300 percent. Passingham said the key has been customer service, as his company is really no different than many others. They all sell similar product lines, so AAAP has to do what it does better than the rest.

Passingham strives to be an industry leader whose business is known for its exceptional service when handling the needs of its clients.