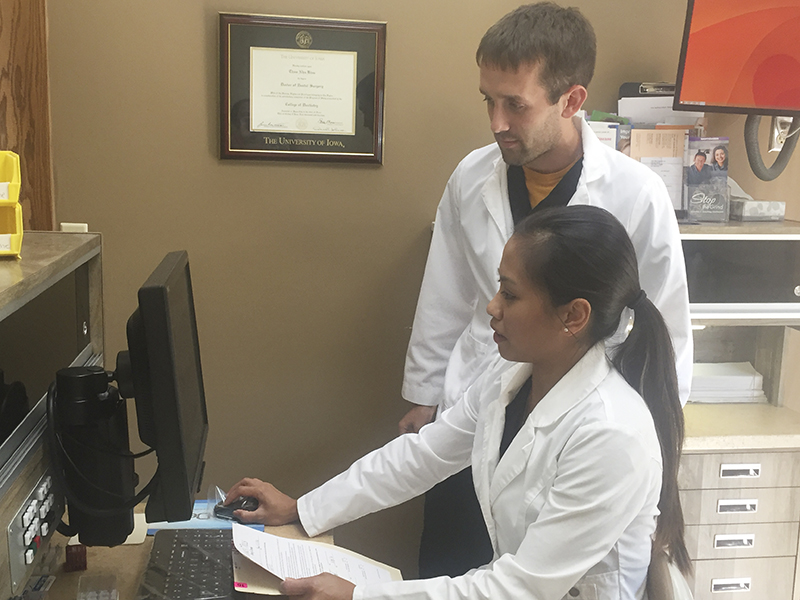 Michael Mehlhoff reviews cases with his wife, Thao Mehlhoff, at their dental practice in Lake Mills. The couple married shortly after graduating from dental school and have worked together ever since. - Kelly Wassenberg/Albert Lea Tribune

LAKE MILLS — Most couples would probably find it difficult to live and work together. Lake Mills’ newest dentists don’t mind it at all. In fact they find they are better together, working as a team.

Michael and Thao Mehlhoff, who met during dental school at the University of Iowa, were divided into the same clinical units at the university because they both just happened to be left-handed. As a result, the couple learned dentistry side-by-side and have been practicing together ever since. Their first jobs were at Best Smiles Family Dental in Davenport, Iowa, where they were the only dentists in their office.

While they enjoyed the experience, they were both looking for something new when they learned dentist Keith Johnson of Lake Mills Family Dental was planning to retire.

With friends in the Mason City and Clear Lake area, the couple had already fallen in love with both the scenery and people of northern Iowa and decided the option of branching out on their own was worth pursuing. After visiting the community, they decided Lake Mills would be the right fit for them and purchased the clinic in June.

Thao Mehlhoff said it might have been impossible for them to start their own practices so early out of dental school, however, the two of them working together made it much easier.

“It would be difficult to specialize in every different thing you can do, but as a team we can cover all the branches of the tree, so to speak,” he said.

Thao Mehlhoff further explained that since there are two of them, they are able to take continuing education classes on different topics, which allows them to have their own specialty areas so it is a rare occasion that they have to refer someone to a specialist.

They both review the cases of new patients together and then decide as a team who would serve the client best. While they both can perform all of the tasks related to comprehensive general dentistry, Thao Mehlhoff specializes more in pediatrics and cosmetic procedures, including Invisalign treatments. Michael Mehlhoff specializes in geriatric patients or those with complex medical issues or oral surgery, including root canals.

Michael Mehlhoff grew up in Cedar Rapids, Iowa, and obtained his bachelor’s degree from Luther College before graduating from the University of Iowa dental school in 2014. He is a member of the American Dental Association and the Iowa Dental Association.

Thao Mehlhoff was born in Vietnam and immigrated to the United States with her family when she was 6. She grew up in Davenport, Iowa, and received her bachelor’s degree from the University of Iowa. She is fluent in both Spanish and Vietnamese and is a member of the American Dental Association, the Iowa Dental Association and the American Academy of Cosmetic Dentistry.

Lake Mills Family Dentistry accepts most form sof dental insurance and can typically see patients for emergency treatments the same day or the next. To schedule an appointment, call 641-592-2200 or at lakemillsfamilydental@wctatel.net.