Funeral services for Donna Cornick will be at 10:30 a.m. Wednesday at Bridge Community Church’s south location, formerly First Baptist Church, at 335 W. Clark St. The Rev. Clayton Balsley will officiate. Visitation will be from 6 to 8 p.m. Tuesday at Bonnerup Funeral Service in Albert Lea. Interment will be in Hillcrest Cemetery. 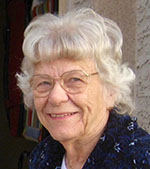 Donna was born Jan. 10, 1936, to Alice and Gerald Beckjorden on the same farm as her grandfather, Henry Beckjorden, and her father in Leland, Iowa. She spent her early years on the farm and in 1940, her grandfather sold the farm and the whole family migrated to St. Paul. Donna was baptized at Salem Lutheran in Lake Mills and confirmed at Bethlehem Lutheran in St. Paul.

Donna became a baptized member of First Baptist in Albert Lea in 1958. She served on many committees, the deacon board, Sunday school, Bible school and treasurer of women’s group for 16 years. She was a member of the Red Cross for many years, serving during the blood mobiles. She also spent several years as a Girl Scout leader when her daughters were young.

Donna’s hobbies included sewing and reading. She was also known as a good cook. Her family and fellow church members loved her home-canned pickles. Grandchildren loved to come and spend time at Grandma’s house, even though they knew she was a stickler for rules and good behavior.

She was a caregiver. She and Roger looked after his parents the last 10 years of their lives and they had her mother, Alice, in their home for 10 years.

She was preceded in death by her infant son, Dale Andrew; parents Alice and Gerald Beckjorden; and brother and sister-in-law, Nick and Rosemary Beckjorden.