Evelyn Alvera Risius, 92, of Bricelyn died Monday, Sept. 19, 2016, at her home surrounded by her family. A memorial service will be at 2 p.m. Sunday at Bricelyn Lutheran Church. The Rev. Nancy Dreier will officiate. Visitation will be from 3 to 5 p.m. Saturday at Bruss-Heitner Funeral Home in Bricelyn, and for one hour prior to the service at the church on Sunday. Interment will be at Bricelyn Lutheran Cemetery. Memorials may be given in her honor to Bricelyn Lutheran Church, Bricelyn, MN  56014 or United Hospital District Hospice, PO Box 160, Blue Earth, MN  56013. Bruss-Heitner Funeral Home in Bricelyn is assisting the family. To leave an online condolence, please visit www.brussheitner.com. 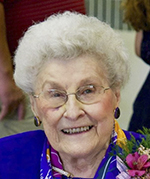 Evelyn was born Feb. 12, 1924, in Owatonna, to Herbert and Pauline (Zander) Hoffman. She was baptized in the Deerfield Lutheran Church and was confirmed at St. John’s Lutheran Church in Owatonna. Evelyn attended country schools and graduated in 1941 from Owatonna High School. In school, she was an original member of the Owatonna Choraliers. After graduation, Evelyn was employed at the Security Bank of Owatonna and served as bookkeeper for several garages. On April 22, 1945, Evelyn was united in marriage to Lt. Harry Risius of Brownsdale. They honeymooned on a train to Columbus, Ohio, where Harry was stationed. They also lived in Sebring, Florida. After Harry’s tour of duty was up, they moved to Bricelyn. Evelyn worked at the State Bank of Bricelyn as an assistant cashier/insurance agent and as a bookkeeper for her husband’s implement business.

Evelyn was active in the Bricelyn Lutheran Church for many years, serving as a Sunday school teacher, singing in the choir, serving as an advisor for Junior Lutherans, and was involved in various women’s organizations. Evelyn also was a member of the Bricelyn Community Club, American Legion Auxiliary, the library board and Meals on Wheels. After retirement from the bank, Evelyn worked as a census taker and at the Bricelyn Canning Company.

Evelyn is survived by her husband of 71 years, Harry; daughters Pamela (Donnie) Trent of Okeechobee, Florida, Dianne (Robert) Coughlin of Belgrade, Montana, and Jeanne (Dwaine) Bruns of Avon; daughter-in-law, Bonnie Risius of Bricelyn; 12 grandchildren; and 20 great-grandchildren. She is also survived by her two sisters-in-law, Benita Hoffman and Arlys Risius.

Evelyn is preceded in death by her parents; brothers Myron (Phyllis) Hoffman and Loren Hoffman; and sons David and John Risius.