Flo was born Jan. 9, 1937, at home. She was the daughter of Edwin and Loretta (Bubs) Voegeli. Flo was born during a South Dakota blizzard on a farm north of Beresford, South Dakota. The doctor came in a sled pulled by a team of horses. Flo’s family moved to Alcester, South Dakota, where she grew up and graduated from Alcester High School. 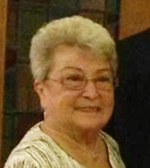 After graduation Flo moved to Sioux Falls, South Dakota, where she met Dennis “Denny” Tellinghuisen. They were married Feb. 14, 1958.

Flo held various positions in real estate and sales while they lived in Sioux Falls. In 1984 she and Denny moved to Albert Lea, where she worked in sales. After retiring in 1998, Flo and Denny worked for Laborers for Christ, building church related buildings in places across the country for eight years. Starting in 2006, Flo and Denny spent summers at Hart Ranch in Rapid City, South Dakota, where Flo worked as a front gate attendant. In the winter they stayed in Casa Grande and in 2015 became permanent residents of Palm Creek Golf and RV Resort .