Funeral services for Gordon H. Yost will be at 11 a.m. Thursday at Mansfield Lutheran Church in rural Mansfield. The Rev. Don Rose will officiate. Visitation will be from 5 to 7 p.m. Wednesday at Bonnerup Funeral Service in Albert Lea, and again one hour prior to the service at the church. Interment will take place at Mansfield Cemetery. 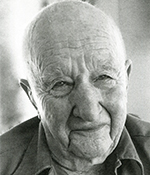 Gordon was active on the century farm. He started farming with horses. He continued to keep up to date on farming practices and drove the big 4-wheel drive tractor at 89 years of age. He graduated from Alden High School and was a lifetime member of Mansfield Lutheran Church.  Gordon and Elizabeth Ebert were married June 3, 1939, in Alden. To this union three daughters were born: Kay, Diane and Rita. He was an active community participant and leader in many organizations serving on the Mansfield Lutheran Church council, Freeborn-Mower Cooperative Services and was its representative on Dairyland Power Cooperative, Alden-Conger School, Alden Township, First National Bank of Alden, Alden Coop Elevator and trustee of Naeve Hospital Association. He was on the bowling league championship teams from 1952 to 1956.  He was very proud that he donated over 15 gallons of blood to the American Red Cross.

Gordon was an accomplished wood craftsman. He made many treasured candle holders for family and friends. He enjoyed watching birds and attracted many varieties to his feeders on the farm and at St. John’s.

Gordon continued to ride his stationary bike 1 to 2 hours a day until his last month. He enjoyed playing cards with his family, persisting to win his share of Kings’ Corner on his last day.

He was preceded in death by his wife, Elizabeth, in 2011; his parents; his sisters Helen Yost, Hazel Carsentson and Lucille Jahnke; granddaughter, Ann Elizabeth Marschalk; grandson, Matt Korman; and son-in-law, Robert Marschalk.

His family cherishes the precious memories he helped create at family gatherings and vacations as well as daily life on the farm. They will all greatly miss his kind heart, gentle humor and wisdom.