Funeral services will be at 1 p.m. Thursday at Major Erickson Funeral Home, 111 N. Pennsylvania Ave. in Mason City. The Rev. Kathy Graves of Trinity Lutheran Church will officiate. Visitation will be from 4 to 7 p.m. Wednesday at Major Erickson Funeral Home.  Interment will take place in Memorial Park Cemetery.  Memorials may be directed to a charity of the donor’s choice. Online condolences may be left for the family at www.majorericksonfuneralhome.com. 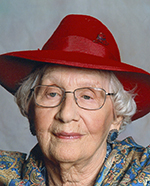 Jeanette was born Oct. 5, 1923, in Mason City, the daughter of Sigurd and Hattie (Breitweiser) Johnson. She graduated from Mason City High School in 1941. Following graduation she worked at F.W. Woolworth. In February 1944, she married Carrol D. “Andy” Anderson in Northwood. They had two sons, Michael and David. Jeanette worked at the Park Hospital – later known as Mercy Medical Center – North Iowa before her retirement in 1980.

Jeanette was preceded in death by her parents; her husband; son,  David Anderson; two brothers Edward and Bill Johnson; one sister, Elma Spargur; two nephews and one niece.