Joan was born on June 3, 1931, in Stillwater, Oklahoma, to Helen and Harvey Gilbert. She had a brother, Richard. Joan grew up in Stillwater and attended Oklahoma State University for two years before marrying Jack Ward and moving to Texas, then Atlanta, and Albert Lea. Joan and Jack had four children: Jane, twins Jan and Judi, and a son, Blake. 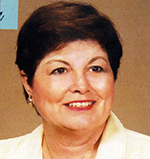 After her divorce from Jack in 1969 she transferred her credits from Oklahoma State University to Lea College, where she earned a teaching degree in elementary education. She then attended Mankato State University and the University of Minnesota, where she received a degree in special education and her master’s degree. She then went on to teach special education in Glenville until she retired in 1997 at the age of 66. After four years of retirement Joan started teaching in the Sober High School in Freeborn until it closed one year later.

During an ACT party, Joan met Rolf Slen. They later married and bought a home on Fountain Street, where Joan lived for 25 years.

Joan was active in the First Presbyterian Church, where she sang in the choir for 24 years and taught Sunday School classes for many years. She was also active in The American Association of University of Women and served two terms as president and served as program director for many years. She was a charter member of the Albert Lea Community Theatre and in charge of costuming for 42 wonderful years.

A celebration of life will take place at 10:30 a.m. Oct. 8 at Good Samaritan Society.

In lieu of flowers, memorial are preferred to the Albert Lea Art Center.