Funeral services for Junior Adolph Dorman of Albert Lea will be at 11 a.m. Monday at First Lutheran Church in Albert Lea. The Rev. John Holt will officiate. Interment will be in Graceland Cemetery. Visitation will be from 4 to 6 p.m. Sunday at Bonnerup Funeral Service, and one hour before the service at the church. Military honors will be accorded by the Albert Lea veterans organizations. Junior died Saturday, Sept. 17, 2016, at home surrounded by his loving family. 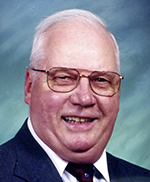 Junior Adolph Dorman was born Aug. 3, 1933, in Freeborn County, the son of Ruth (Krause)and Adolph Dorman. Junior attended rural schools near Freeborn and in Albert Lea. At the age of 15, he enlisted in the National Guard, a member of the Army Infantry Company 1, 25th Infantry Division earning the rank of master sergeant. He was proud to be a veteran. After the service he worked at Queen Stove in Albert Lea and attended Hamilton School of Business in Mason City. After graduating from business school, he went to work at First National Bank in Albert Lea. He went on to take banking classes and graduated from the Graduate School of Banking at the University of Wisconsin. He served as the bank president at the Norwest Bank in Silver Bay before returning to Albert Lea. After returning to Albert Lea, he worked in the office at Wilson & Co., and was serving as vice president for the family business, Hanson Tire Service, prior to his death.

Junior was united in marriage to Wanda Hoyne on July 31, 1954, at the Glenville parsonage. From this union three sons were born: Paul, Jay and Daniel. Junior enjoyed working with his father training horses and traveling with him on the horse racing circuits around the country. He was a past member of the Albert Lea Jaycees, Kiwanis Club, American Cancer Society and Sibley Parent Teacher Association. He was a member of First Lutheran Church in Albert Lea and a past treasurer of the congregation.

He enjoyed swimming at the YMCA with the Rusty Hinge Group. He was a life member of the Veterans of Foreign Wars, where he served as quartermaster and secretary of the bowling league. He also was a member of the American Legion, the Elks Club and the Eagles Club. He enjoyed playing cards with friends at the Sportsman’s Tavern and at home with his family — win or lose, it was a great pastime.

He was proud to have attended the dedication of the Korean War Memorial in 1995 in Washington, D.C., where President Bill Clinton was the speaker. He took great pride in helping his son, Dan, when he campaigned for and was elected as state representative for Freeborn County. Junior enjoyed the campaign trail and hit the road with zest, to help make Dan’s dream come true. After Dan was elected, Junior enjoyed joining him on trips across the state to learn about proposed capital investment projects.

In later years, Junior was at his best when he followed his grandchildren on band trips, athletic events and other competitions around the state and other areas. He especially enjoyed the trip to London and Norway when Christopher studied abroad. The family thanks Matt and Chris for the love and time they gave grandpa.

Memorials are preferred to First Lutheran Church or the Albert Lea Education Foundation.

Revelations 21: 4 — “He will wipe away every tear from their eyes, there will be no more death, or mourning, or crying or pain, for the old order of things has passed.”