Living an outdoorsman’s dream in Alaska

This past week’s weather has become a little more fall-like, which makes this writer very happy. I will always welcome the cooler days and nights with open arms, as I have pretty much had my fill of high humidity and high dew points. Bring on the fall season with its cooler weather and vast array of colors! I am aware of what comes next, but for the time being I will savor the moment.

My brother-in-law, Lynn Johnson, who lives in Nome, Alaska, periodically gives me updates of his hunting and fishing experiences. This time of year the weather in and around Nome is usually cool and rainy. A few weeks ago, he was fishing for red salmon and then he took hook and line to the rivers in search of silvers. He said the number of silvers is down this year, but he did catch a dandy Arctic Char.

When I was talking to him a few weeks ago, he voiced his anticipation of the upcoming moose season. He called me a couple of days before the season to tell me that he had his tags and was ready to go. I didn’t hear from him for a couple of days, but then he sent me a picture of a nice bull with a 59.25-inch spread. He was hunting with a friend of his and when they hunt together they split the meat.

After they had secured this nice bull, Lynn called his wife who drove up to where they were with bags for the meat and whatever else they would need to bring the meat back. They used 4-wheelers to get to their hunting area, but once they bagged the moose they needed more than ATVs to carry all of the meat — this is where the SUV comes in. You don’t want to leave moose or any meat out in the bush too long because of the bears. After that hunt, Lynn said he was satisfied that he has enough fish and red meat in the freezer to last them the winter.

They have a cabin about 70 miles from Nome and some of his friends who visited that area recently told him there were bears everywhere. After he checked it out, he told me the cabin had suffered some damage from bears trying to get inside, so he did the necessary repairs and enough extra to discourage them. Boards strategically placed with nails sticking out will usually discourage a bear from any mischief.

From the river that runs right past Lynn’s cabin, he can catch trout and grayling and it’s not uncommon to latch onto a trophy grayling not that far from the cabin’s door. A couple of weeks ago, he was still planning on doing a little pike fishing, but he said his freezers are about full of moose, caribou and salmon.

When we spoke earlier about his really wanting to get a moose, I told him I didn’t want to see him on the Discovery channel whining like some of those folks do when they don’t get one.

Although Lynn is retired, he is still plenty active in the outdoors — especially when it comes to hunting, fishing and flying his planes. Last week, he drove to a friend’s mining camp using his 4-wheeler to cross the river to get to the camp. He said it was a little hairy because of a strong current and high water, but he made it without incident. As far as wildlife goes, his friend told him there were many wolves in the area, but he had yet to see a bear. Lynn said you should always be aware of your surroundings because a bear can appear without warning and you don’t want to be caught with your guard down.

I myself have slowed down in the last few years because of bad knees and arthritis, but even when I was in my prime years I never have had anywhere near the adventures Lynn has. He moved to Alaska, hungry for adventure, and he has surely found his share over the years. I do believe he has slowed down some with age, but not enough that anyone would notice. Yes, he is in his element living in a state that allows him to enjoy what he loves to do.

Until next time — there is still plenty of open water fishing to be done. The small game hunting season has started and the waterfowl season is just around the corner. It’s a great time of year and a great time to make your own outdoors memories. 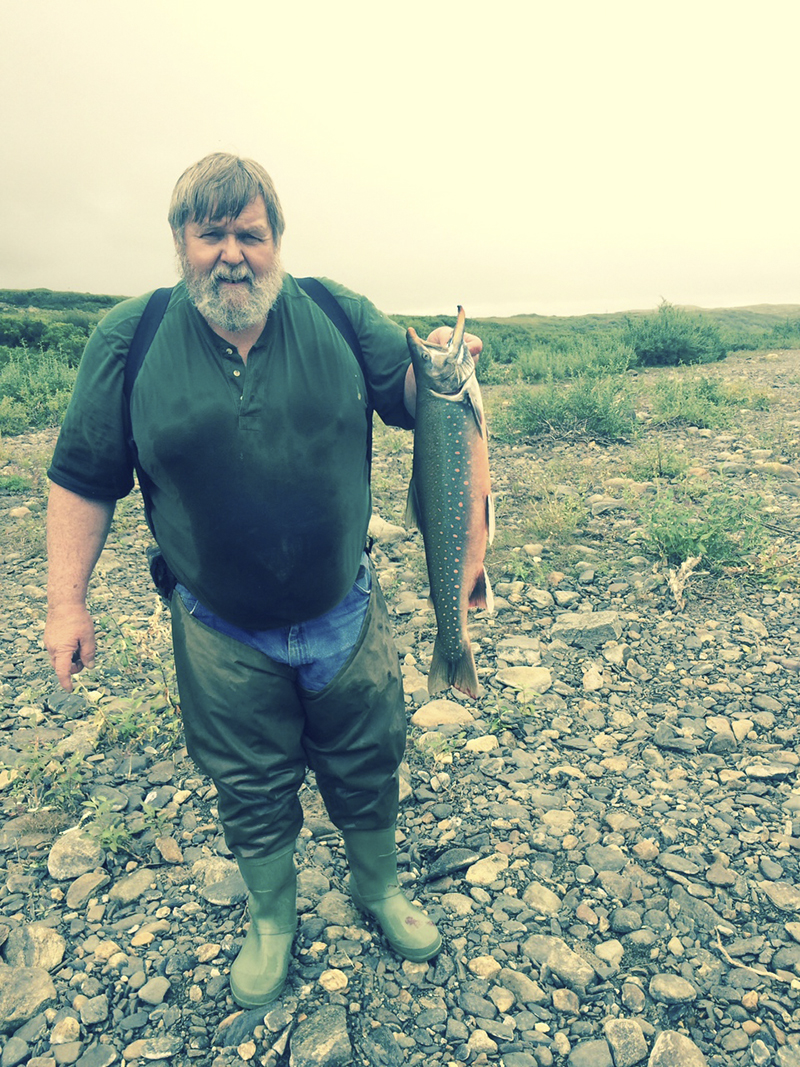 Johnson is shown here with a nice-sized Arctic Char that he caught in a river near Nome, Alaska. 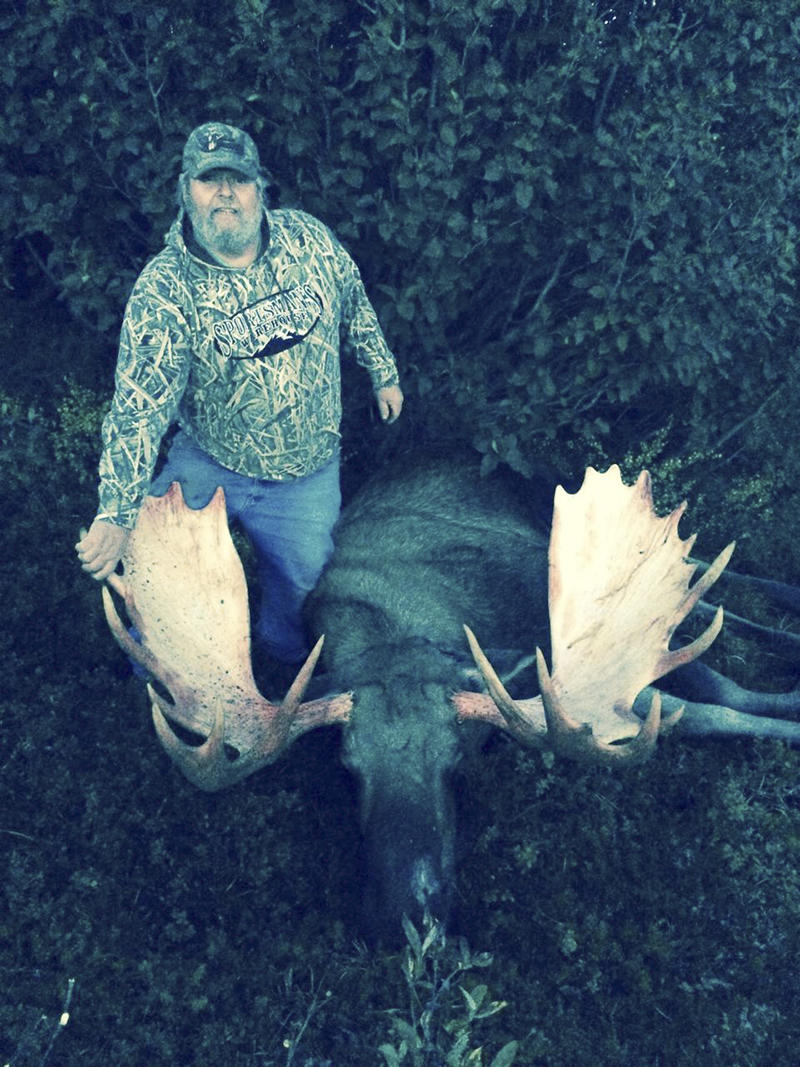 Johnson with a close-up of the moose he shot near Nome, Alaska. 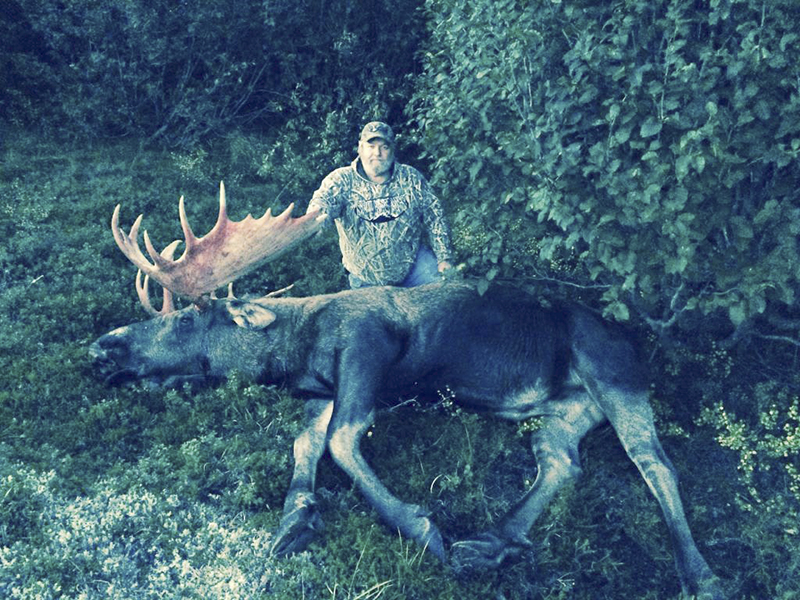 Lynn Johnson, formerly of Twin Lakes, shown here with a nice moose that had a 59 1/4 inch spread near Nome, Alaska.