A North Mankato man has been charged in Faribault County District Court with multiple counts of criminal sexual conduct after allegedly sexually abusing a girl for five years. 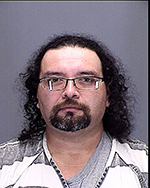 Moreno allegedly sexually abused a girl in Wells 2010-15, from the time the girl was 7 until she was 12 years old.

He allegedly threatened to hurt the girl’s mother and sister if she told anyone.

Moreno’s second appearance on the charges was Monday. His next court appearance is scheduled for Sept. 26, and he is being held in Faribault County jail.