A Fairmont man was charged with multiple felonies Thursday in Freeborn County District Court in connection to a high-speed chase Tuesday in Albert Lea. 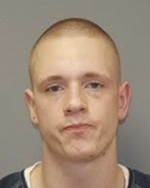 Levi Troy Dahl, 21, faces two counts of criminal vehicular operation, one count of fleeing a peace officer in a motor vehicle and one count of reckless driving.

Dahl is charged in the chase that reached speeds of more than 60 mph, and resulted in a two-vehicle crash near the Freeborn County Government Center.

Squad video of the chase was shown in court Thursday in Dahl’s first appearance on the charges.

Court documents state an Albert Lea police officer was heading east on Fountain Street Tuesday evening while on patrol when he noticed the driver of a Chevy Malibu matched the description of a suspect in a Faribault County burglary during which guns had been stolen.

The officer reportedly activated his emergency lights and attempted to stop the vehicle, but the vehicle continued to drive very slowly and did not stop.

The Chevy then reportedly collided with a vehicle parked facing north on the opposite side of the road, causing both vehicles to go over the curb, the sidewalk and into a municipal parking lot. Both vehicles sustained “significant front-end damage,” court documents state.

One of the bags reportedly field-tested positive for meth.

A speedometer found frozen after the crash indicated the Chevy was traveling 64 mph at the time of the crash.

Court documents state after being transported to the hospital, Dahl told the officer he “was running from the officer to avoid going to jail.”

The passenger in the Chevy, Cheyenne Debra Goodhart, 20, of Fairmont, hit her head during the collision, and was treated and released at the hospital, court documents state. Goodhart reportedly had a large bruise on her face, and her eye was swollen shut.

Dahl’s next court appearance is scheduled for Sept. 22.