A Phoenix man found with more than 8 pounds of cocaine in his vehicle during a traffic stop in 2014 was sentenced to more than 6 1/2 years in prison Thursday in Freeborn County District Court. 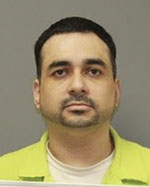 Assistant Freeborn County Attorney David Walker said Ramirez will serve more than four years of that sentence and be released on parole.

Ramirez will be deported by Immigration Customs and Enforcement, Walker said.

Ramirez was a passenger in the left rear seat of the vehicle that was found with 8.5 pounds of cocaine in September 2014 on a traffic stop on northbound Interstate 35, near the overpass bridge on Interstate 90.

Court documents state a Minnesota State Patrol trooper initially pulled over the vehicle because it did not have a rear license plate light on.

Rogelio Rocha, of Tolleson, Arizona, was the driver and was found to have an Arizona driver’s license. The vehicle was registered in Minnesota but had a license plate registration sighting on Interstate 40 in Arizona that same month.

A search of the vehicle with a dog reportedly alerted to the odor of drugs from the car near the front passenger-side quarter panel and front bumper.

The trooper found two packages behind the glove box and near the front quarter panel. The third package was under the center console of the driver’s side.

Court documents state Ramirez was found with $1,195 in cash on his person.

Maria Guadalupe Nunez-Arenas de Garcia, 70, also of Tolleson, who was in the right-hand rear passenger side of the vehicle, was placed on probation for two years in July in Freeborn County District Court.

Nunez-Arenas de Garcia was sentenced to 364 days in jail — 353 days were stayed and she was given credit for 11 days served.

Eliel Garcia of Bloomington — the front passenger in the vehicle — was also charged in connection with the incident. Charges against Garcia and Rocha were dismissed.