Memorial services for Mario Boone of Albert Lea, will be at 10:30 a.m. Wednesday at St. Theodore Catholic Church in Albert Lea. The Rev. Russell Scepaniak will officiate.

Friends are encouraged to join the family in a celebration of life from 5 to 8 p.m. Tuesday at Bonnerup Funeral Service, and one hour before the service at the church. 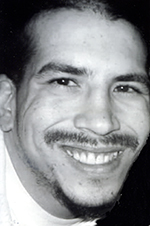 He was born Jan. 16, 1981, in Albert Lea, raised by Michael Boone and Michelle Jardine. He enjoyed playing baseball and hockey while he attended Albert Lea Schools.

Mario’s tender heart enabled him to be a tremendous caregiver.  Providing comfort and care to his great grandmother, niece, Myah, and many children along the way. He enjoyed holidays and special occasions with family. His greatest treasure was his niece, Myah. Mario could light up a room; his laughs were contagious.

Mario loved hanging out with friends, was an avid Vikings fan and WWE wrestling fan. He loved horror movies and enjoyed dressing up as Freddy Krueger every Halloween.

He was preceded in death by his great-grandparents Joseph and Carmen Dupont; grandparents Mary Louise Boone and Steven Dupont; uncle, Jimmy Betsinger; and aunt, Joanne Dupont.