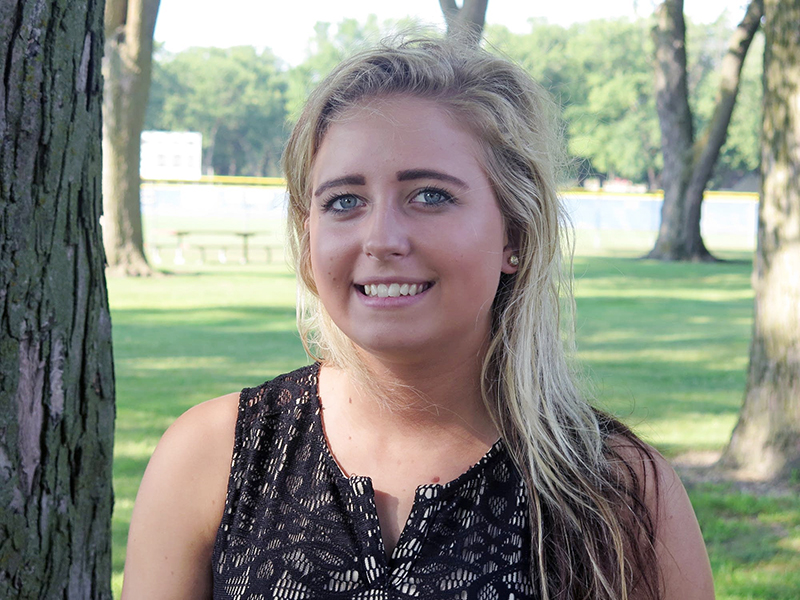 Alyssa Drescher was expelled from United South Central High School in Wells 2 1/2 years ago after law enforcement found a pocket knife in her purse in her locker during a random search at the school. The state appeals court and the Minnesota Supreme Court reversed the school board's decision. Mark Steil/MPR News

With school starting in many Minnesota districts Tuesday, administrators around the state are facing a new legal landscape. A Minnesota Supreme Court ruling will likely change the way administrators discipline students caught with weapons.

Under the court decision, schools will have to investigate the student’s intent when weapons that aren’t firearms show up in school.

The court’s ruling stems from a lawsuit brought by now 19-year-old Alyssa Drescher. The southern Minnesota resident clearly remembers the day almost two and a half years ago when her world was turned upside down.

Her school superintendent said he would push to expel her from United South Central High School in Wells for a weapons violation.

“The superintendent called my dad and said he wanted to make an example out of me,” said Drescher. “When he said that I broke down. I didn’t know what to do because I’ve never gotten in trouble …. never had a detention or anything.”

A drug-search dog alerted on Drescher’s locker. No drugs were found, but law enforcement turned up a pocket knife in her purse.

Drescher explained she’d used the knife to help her boyfriend with farm chores, then placed it in her purse. She was expelled for the rest of the school year for violating the school’s weapons policy. But she and her family fought back.

There was an outpouring of public support, including from some state legislators, who said the school’s punishment was too harsh for an innocent violation.

The Minnesota Department of Education sustained the expulsion order, but the family had better luck in the judicial system. The state appeals court reversed the school board, and the Minnesota Supreme Court upheld that ruling. Drescher’s supporters were elated that the school district’s expulsion decision had been rebuffed.

“They did go too far,” said Drescher’s attorney Andrea Jepsen with the School Law Center in St. Paul.

“And this really, I think, is a swing of the pendulum back to a common sense approach to disciplining students,” Jepsen said.

A key part of the Supreme Court ruling holds that in order to expel, a school district must first determine that a student deliberately violated school policy — a “willful violation” in the language of the law. But since Drescher maintained she accidentally carried the knife into school, the court ruled there was no intent to violate school policy.

That represents a sea change. In the past, Minnesota school districts have routinely expelled students in similar forgotten weapons cases, mostly for bringing in knives. But attorney Jepsen said the Supreme Court decision means schools now have much less leeway to expel under state law.

“The appropriate expectation is that school districts will follow the law explicitly,” she said. Jepsen.

To be clear, the court ruling does not include firearms. Bring a gun to school, even unknowingly, and expulsion is almost certain.

Keith Fleming took over this summer after the superintendent who expelled Alyssa Drescher retired.

Fleming says he too might have expelled Drescher had it been his call. He says “I forgot” is a student’s go-to excuse, and often not credible. Now, he says the Supreme Court ruling means administrators will have to prove “I forgot” is not credible in order to expel someone.

“So as we’re going through the investigative process, we’re going to be thinking about a line of questioning that would establish intent,” said Fleming.

Fleming said if a case turns out to be true forgetfulness, a district can still punish, but it will have to be something less than expulsion.

Despite her victory in court, Alyssa Drescher says being kicked out still hurts.

“I hope my situation helps other kids,” she said, “and changes the policy [so the system] looks at individuals and not everyone as a whole.”

The college sophomore’s days in court may not be over though. She and her lawyers are considering a lawsuit over the unlawful expulsion.