Mother describes shooting victim as a lover of the outdoors

The mother of the Alden man who was killed at Myre-Big Island State Park last month is remembering her son as a role model and a good older brother.

Denise Brown, mother of 23-year-old Spencer Brown, said her son had moved to Freeborn County from Omaha, Nebraska, at the end of May to be with his girlfriend. He had plans to go back to college. 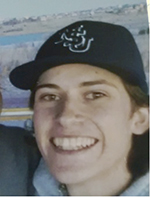 Spencer Brown, who graduated from Millard North High School in 2011, had a passion for baseball and enjoyed fishing, hunting, kayaking and hunting, his mother said.

“He liked anything that had to do with the outdoors,” she said.

He worked for the Omaha Storm Chasers for several years and attended Montana State University for a time with plans to major in forestry.

She said though she and her son texted throughout the summer, they had not talked on the phone since the end of May.

“I was pretty devastated,” she said about hearing of her son’s death. “I was in total shock — devastated. It just feels like a knife has gone through my heart. I still have a hard time believing that he’s not here anymore. It still doesn’t seem real.”

Authorities said Spencer Brown was found dead in a locked 2001 Audi station wagon the evening of Aug. 23 in a parking lot near the Big Island pavilion after dispatchers received a 911 call from David Michael Easter of Brownsdale.

Easter, 26, reportedly told dispatchers he had shot the man in self-defense and claimed Spencer Brown approached him with what appeared to be a bat.

In a transcript of the 911 call, Easter claimed he left the scene to call 911 because he didn’t know if Spencer Brown had friends with him. Easter said he, his wife and their infant daughter were getting into their vehicle when Brown pulled up.

Authorities stated last month evidence does not show the shooting was in self-defense and charged Easter with second-degree murder.

Denise Brown said she does not know of any connection between the two men. She said her son was laid back and loved to joke. He could make friends easily.

Her son’s funeral was held earlier this month.