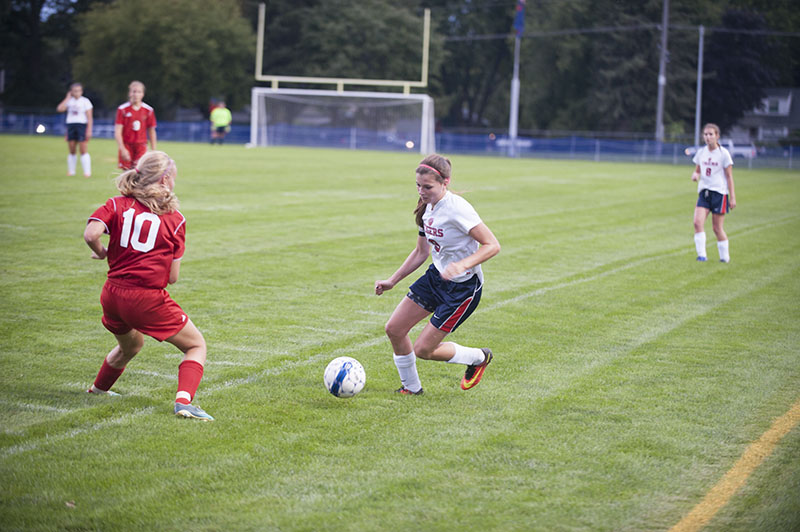 Albert Lea forward Rachel Rehnelt looks for a way to get past Fairmont’s Lindsey Miles during the first half of Tuesday’s game in Albert Lea. Rehnelt socred the game-winning goal on a penalty kick in overtime. Jarrod Peterson/Albert Lea Tribune

Monday’s girls’ soccer match between Albert Lea and Fairmont was a physical one. It was more like rugby than soccer.

Tied 1-1 in the first period of overtime, Albert Lea finally benefited from an official’s call it seemingly couldn’t get all night.

Rachel Rehnelt was tackled inside the penalty area, leading to a penalty shot and a chance for her and the Tigers to put away the pesky Cardinals.

Seconds later after lining up to take the shot, Rehnelt was celebrating with her teammates, as she beat goalkeeper Hailey Burmeister in the top left corner.

The Tigers went into defensive mode for the rest of overtime to win the game 2-1. 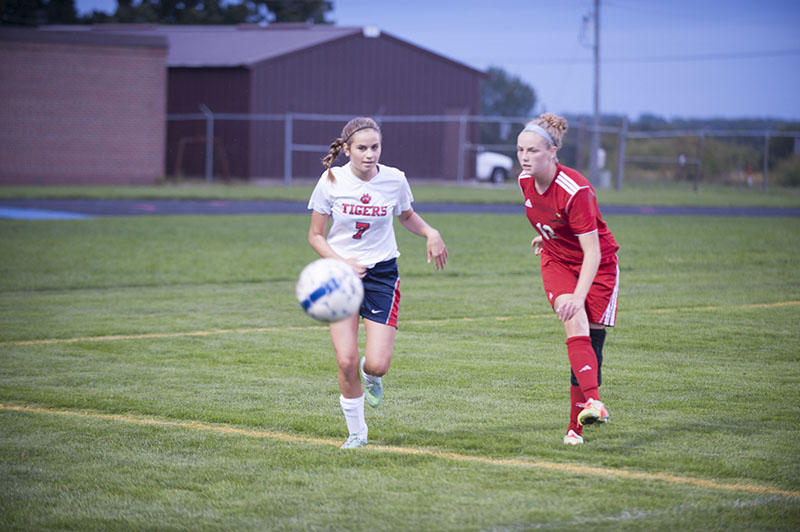 Albert Lea attacker Lucy Sherman watches as Fairmont defender Morgan Shriver kicks the ball out of bounds in the first half of Monday’s match.

“It was a hard-fought battle,” said Tigers coach Laura Wangen.

The Tigers got off to a fast start, scoring less than 10 minutes into the game when Callie Hanson put in a Turena Schultz corner kick.

The Tigers’ offense continue to put several scoring chances together, but nothing materialized the rest of the match.

Up 1-0 late in the second half, all the Albert Lea girls’ soccer team had to do was keep the ball out of its zone and it would win the game.

Fairmont sent a ball deep into Albert Lea’s zone and, from there, it was a foot race between Fairmont’s Abby DeWitt and Albert Lea’s Ella Zelenak.

DeWitt ended up getting the edge on Zelenak, resulting in a tie game with 2:18 left.

Rehnelt was able to erase Fairmont’s late goal with her penalty shot.

The Tigers are now 2-2 on the season, and their week is just getting started.

Start time is scheduled for 7 p.m.