NEW YORK — Stevie Nicks is trying to whittle down the set list for her upcoming solo tour, but one song that definitely made the cut is her 1983 hit “Stand Back” with Prince. Originally written as a compliment, now it will be a tribute.

The Fleetwood Mac singer, who heard Prince’s “Little Red Corvette” on her car radio and loved it so much she decided to write an answer song, hasn’t played “Stand Back” since Prince died in April. 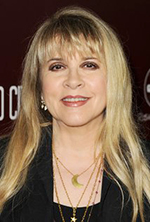 “I will be singing it for the first time without Prince being on the planet,” she said. “That is going to be horrible, but it doesn’t mean that I don’t want to pay homage to my ‘Little Red Corvette’ friend. I’ll sing it forever for him now.”

Nicks’ two-month tour with The Pretenders kicks off Oct. 25 in support of her 2014 album, “24 Karat Gold: Songs From the Vault.” She never got a chance to promote the CD since she spent most of the last three years on the road with Fleetwood Mac.

Nicks promises songs from “24 Karat Gold” as well as old favorites like “Dreams,” ‘’If Anyone Falls,” ‘’New Orleans,” ‘’Bella Donna,” ‘’Rooms on Fire” and “Stop Draggin’ My Heart Around.”

“Stand Back” will be there, fueled by the memory of her having lured Prince into the recording studio to play keyboards on the song he inspired. She said one of her deepest regrets is never getting him to join her onstage for a live version.

Though Nicks and Prince were friends, the two didn’t hang out much. One thing they disagreed on was drug use. “He hated them. And he hated that I did drugs and that’s probably why we didn’t hang out more,” she said.

Nicks has no current record deal — “I’m free to do whatever I want” — after delivering “24 Karat Gold” to Warner Bros. It’s an album of orphan songs, demos mostly written between 1969-1987.

“These were written during the days when everybody was pretty high and crazy and there was a lot of love affairs going on and a lot of breakups going on and just a lot of emotion going on,” she said.

The 68-year-old singer-songwriter said that there were many reasons why the songs never got on any of her albums or those by Fleetwood Mac. In some cases, she didn’t like the arrangements and pulled them. Or they came out soulless.

So in 2014, she and producers Dave Stewart and Waddy Wachtel went to Nashville, Tennessee, and re-recorded the songs in a matter of weeks. When they were finished, she put one CD in a gold box, wrapped it in a red bow and delivered it to the front desk of Warner Bros. Then she rejoined the Fleetwood Mac reunion tour.

Now she’s getting ready to hit the road again, one of the few legendary acts like the Rolling Stones or Bruce Springsteen to be able to deliver a three- or four-hour set because they never stopped making music.

“I am very aware that artists over 50 don’t — and are never going to — sell a lot of albums any more. It took me years to accept that,” she said. “Now we can just pretend we’re like 15 and start over and make records just because we want to.”