Funeral services for Suzanne I. Miller will be at 1 p.m. Tuesday at Redeemer Lutheran Church in Alden. The Rev. Greg Ofsdahl will officiate. Visitation will be from 4 to 7 p.m. today at Bonnerup Funeral Service in Albert Lea, and again one hour prior to the service at the church.  Interment will take place at Shady Oak Cemetery. 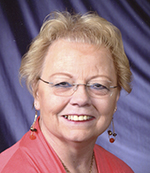 Suzanne Ilene (Stewart) was born Aug. 21, 1945, to Harold and Lucile (Moench) Stewart in Lebanon, Oregon. She was raised in a military family so they moved around often, some highlights being Washington, Alaska and Colorado. She graduated from Franklin Pierce High School in Parkland, Washington. On Jan. 14, 1977, she was united in marriage to Ronald Miller in Colorado Springs, Colorado. Shortly after, the family moved to Conger, a place they have always called home. Suzanne worked as a teller at a bank, worked in retail and also did some secretarial work. She was a member at Redeemer Lutheran Church, where she was active in Church Circle, Choir, and was also a youth group leader.  Suzanne was on the board at Thrivent, she was a 4-H leader, she participated in Homemakers Club and she often hosted a card club. In her free time, she loved to travel, sing, watch movies and spend time with her husband, children, and grandchildren. Her family meant the world to her.

She is preceded in death by both parents; and a brother in-law, Chuck Briles.

She is survived by her husband of 39 years, Ron; children Michael Miller and Caroline (Perry) Loewe; grandchildren Alexander and Sophia Miller, Matthew, Hayley and Nathan Davis; a sister, Jodie Banks; sisters in-law Nancy Briles and Joan Stiles; as well as many other loving relatives and friends.