Memorial services for Theodore (Ted) Hellie will be at 10 a.m. Saturday at East Freeborn Lutheran Church. The Rev. Matthew Griggs will officiate. Visitation will be from 4 to 7 p.m. Friday at Bonnerup Funeral Service and one hour prior to the service at the church. Interment will be in East Freeborn Lutheran Cemetery. Military honors will be accorded by Albert Lea area veteran groups. 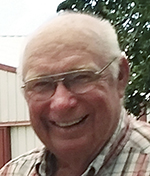 Theodore (Ted) Robert Hellie was born Aug. 21, 1936, to Theodore Rueben Hellie and Clara Grasdalen Hellie. Ted lived his whole life on a century farm in Bancroft Township, except for two years in the Army. He graduated from Albert Lea High School in 1954. He was a lifelong member of East Freeborn Lutheran Church, where he was baptized and confirmed.  He died peacefully at home after a short bout with a very aggressive cancer.

Ted loved his life on the farm. Even in retirement he had a regular route to check the fields. He was a good steward and looked for improvements in the farming process. He was happy to have experienced the progress from the horse-drawn era to today’s technology. Ted had a kind, generous and dependable spirit. He cared for many animals through the years, many of which picked him and the farm as a refuge.

In his younger years, Ted enjoyed hunting and fishing and in his later years he fed the birds and was content watching wildlife. He bowled in Albert Lea for many years. He also enjoyed playing golf with family and friends since the 1980s. Ted attended many yearlt engine shows.  His favorite place was the farm, where he spent hours in his farm shop entertaining, rebuilding small engines and building trucks with home-grown walnut. He enjoyed being a grandpa and always had time to prep the four-wheelers for the grandchildren or take a quick trip to the candy store or Dairy Queen.

He is survived by his wife, Judy, of 50 years; children Siri (Mark) Kalthoff of Apple Valley and Jana (Wayde) Paulson of St. Cloud; granddaughters Alexa and Sydney Paulson; grandsons Sean and Tae Kalthoff; sister, Marjorie (Ozzie) Way; brothers and sisters-in-law: Jill (Jerry) Morstad and Wayne (Sarah) Johnson; mother-in-law, Elaine Johnson; and a circle of friends too numerous to mention, including his son John’s friends, who remained dear to his heart.

He was a good friend to all. Blessed be his memory.