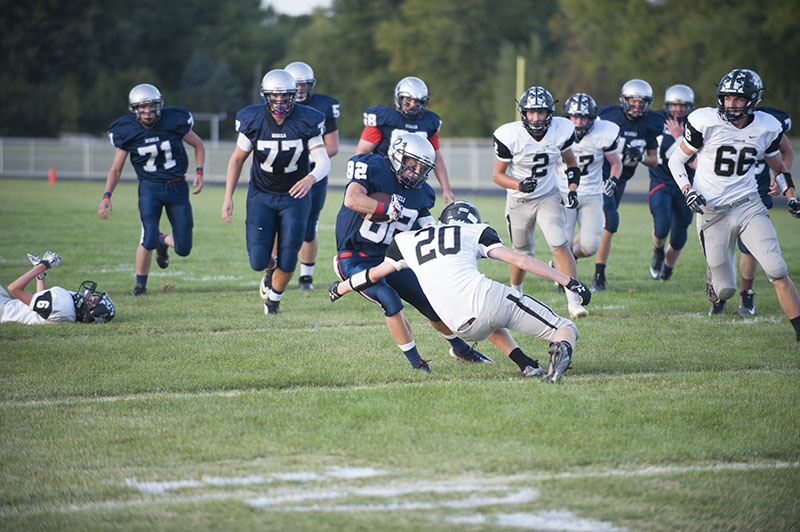 United South Central wide receiver Zach Linde tries to spin out of a tackle attempt made by Kingsland’s Ethan Fenske in the first half of Friday’s game in Wells. USC beat Kingsland, 33-6. Jarrod Peterson/Albert Lea Tribune

The Rebels wanted to win their home-opener, while the Knights surely wanted to spoil it.

The Rebels overcame a slow start on their early possessions and got a fourth-quarter interception from Mitch Harpestad that helped the Rebels blow the doors off the game and propelled the Rebels to a 33-6 win.

USC fumbled on its first offensive play, giving Kingsland the ball deep in USC territory. A couple of plays later, quarterback Ethan Fenske found Neal Mulhern on a slant and Mulhern bulldozed his way into the endzone.

But that would be the only and last time the Knights would threaten the Rebels’ defense.

Later in the first quarter, after USC turned the ball over on downs, it forced a Kingsland fumble.

Moments later, Harpestad rolled out and found Trent Stevermer all alone in the endzone to tie the game.

The Rebels forced another turnover in the second quarter, but were unable to do anything with the ball.

USC’s final score of the half came on a 4-yard run by Roel Pearles with 3:16 left.

Both teams generated little offense, in terms of yardage in the third quarter, but the fourth quarter started with a bang.

Fenske dropped back to pass, but Harpestad stepped right in front of the intended receiver. From there, it was a 45-yard footrace to the goal line, one Harpestad eventually won.

That play seemed to turn the tide in the game.

“That play gave us quite a bit of momentum,” said USC coach Brandon Neseth.

Harpestad rushed for another touchdown later in the quarter, and with 4:30 remaining, Hunter Johnson took off for the endzone on a 25-yard run to put the game out of reach.

While the offense exploded, it was the defense that set the tone.

“We allowed only 20 rushing yards on 21 carries and forced four turnovers,” said Neseth. “The defense played really well. The offense struggled a little. We had some holding penalties and some fumbles, but it’s stuff we can easily fix.”