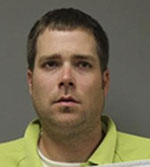 Boyum allegedly took pictures of and engaged in sexual penetration and contact with an 11-year-old girl Saturday night, according to court records.

District Court Judge Ross Leuning set conditional bail at $50,000.
A settlement conference is scheduled for Oct. 26, and a jury trial is scheduled for March 14, if the case has not been settled by then.