Memorial services for Wayne Arlo Miland will be at 11 a.m. Thursday at First Lutheran Church in Albert Lea. Reverend John Holt will officiate. Visitation will be from 5 to 7 p.m. Wednesday at Bonnerup Funeral Service, 2210 E. Main, in Albert Lea and again one hour prior to the service at church. Interment will be in Hillcrest Cemetery. Military honors accorded by the Albert Lea area veterans organizations. 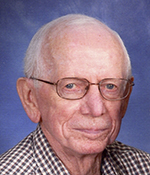 Wayne was born Nov. 16, 1933, to Theodore and Esther (Bosart) Miland in Spring Valley. Around the age of 5, Wayne and his family moved to Alden. Wayne graduated from Alden High School in 1951. He then served in the U.S. Army and was honorably discharged in 1957. He was then united in marriage to Carol LaVon Tapp on Sept. 22, 1957, at First Lutheran Church in Albert Lea. Carol and Wayne made their home in Albert Lea, raising their two children, Kevin and Linda. He was employed at Queen Products, May Engineering and Weyerhaeuser before joining nine others in purchasing Alamco in 1982.

Wayne was a proud member of the Lions, Elks and Eagles. He was a member of First Lutheran Church. He enjoyed hunting, fishing, watching Vikings games and dancing. He had a passion for building, remodeling his homes all by himself. He will fondly be remembered for his calm personality, sense of humor and steadfast support of others.

He will be forever missed by friends and family.

He was preceded in death by his parents; wife, Carol, in 1992; and brother, Ted Miland.